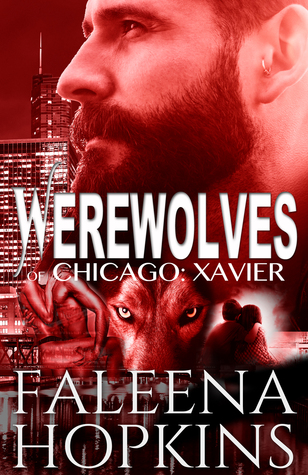 A single mother of two complicating his life isn't what this werewolf needs right now.

Especially when they're so close to taking down the Russian mob boss. But guilt and chemistry has Xavier compelled to help newly widowed Emily. The fact that her kids adore him only makes the truth of who he really is that much worse. If they knew, would they hate him...or love him more? It's a chance this wolf is not willing to take.

Three stand-alone romantic suspense novels, each starring a different wolf as they try to take down evil in Chicago to save a city that doesn't believe they really exist. Superheroes with no capes or public identity, doing what they have to, to survive. They don't want love, but the wolf knows before the man...

I started reading these books a few years back, but had gotten behind in the series. Recently while looking through my huge to be read stack, I decided to pick this one up and jumped right back into the world of the Chicago wolves.

A little back story about these wolves would include the fact about the wolves being a sort of vigilante group. By that I mean, when they see horrible people doing horrible things, they take care of it. Not always lethally, but sometimes-usually when someone really deserves it. When they hear about a young mom with two children and an abusive husband, Xavier decides to scare him with his wolf form, but manages to kill him instead.

Emily is now a widow with young children. She had been horribly abused and scared into staying with her abuser. However, she feels likes she needs to act the part of the grieving widow even though she is pretty happy about it. Her innate decency makes her feel guilty. When she meets Xavier at the morgue while identifying her husband, she is attracted to him and made to feel doubly guilty at the same time. On Xavier’s part, he just wants her, but he knows she will never have him if she knew the truth. That doesn’t mean he will stay away from her.

The main story arc throughout these books have featured the Russian mafia infiltrating Chicago. The wolves are smack in the middle of routing them out and getting rid of them. The previous books were full of action and danger, as well as romance. This particular installment had some of the mafia part in it, but not to the extent that it was in the previous books. And because of that, while there is some dangerous moments, I can’t say that it was as exciting as the previous ones. The difference made this more of a romance and I was fine with it, although I did expect a bit more danger. The chemistry between the two main characters was pretty much off the charts, although Emily fights it quite a bit-especially at first.

I enjoyed catching up with the previous couples and seeing them having their happily ever afters. It’s always nice when characters from a previous book show up. These wolves sincerely care about each other. It’s not a huge pack and that’s okay because they are enough. These guys work together, play together, and live closely to each other. They are into each others lives in just about every aspect and I appreciated that. Team work at its finest. The author has truly given us characters to love and wonderful romances. I thought this one veered into erotica, more so than the others-at least if I am remembering correctly. It has been awhile since I last read these.

Adult paranormal readers will find a lot to like about this book and series. Recommended!