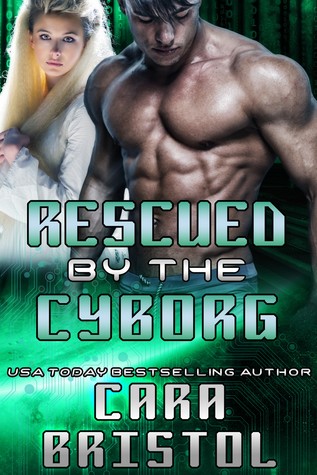 A cyborg with haunted past, a woman with a clouded future…
Battered and broken, hostage and sole survivor Solia waits for death at the hands of vicious predatory aliens when Cy-Ops agent Guy Roarke disobeys orders, charges in, and rescues her. A former medic, he initiates emergency medical procedures before rushing her to Cybermed, in hopes of saving her wing so she can fly again. He’s taken with the delicate, brave Faria, but his best intentions result in unfortunate consequences that place her in greater jeopardy. Can he overcome the guilt of past mistakes in time to save her life?

I read my first Cara Bristol last year with Alien Mate. I really enjoyed this science fiction romance story. When I was offered to try another book by this author, I’m jumped on the chance. Now, most of you know that I rarely jump into a series in the middle. I’m usually a person who starts off with book one and only book one. However, I thought that since this was #5.5, I figured that most novellas can be read out of order. It just seems to be the nature of most novellas. That seemed to work here. I don’t know if it will work with the rest of the series.

So I went into this book pretty blind (as I tend to do with most books). I knew it was a sci-fi romance, but I didn’t really know much beside that. I didn’t even read the blurb (sorry authors, I know a lot of time is spent on the blurbs, but I prefer not to know what is going to happen at all. I’m the same with movies and avoid trailers as much as possible).

When I opened this book and started reading Chapter 1, I thought to myself “what did I get myself into?”. This story starts off with the heroine on an alien planet. She’s in a cage and these alien creatures, Ka-Tê, which were pretty terrifying, had been killing off and torturing everyone that came in with her. She has a conversation with another prisoner, another woman in the cage next to her. I knew nothing about this planet, the creatures which can rivel my worst nightmares or anything else. Would I have known more about these things if I started with book one? Well, it wasn’t long before things started to fall into place.

Solia is the woman who was in the cage. She is a Farian, which is a creature with wings. So things are pretty dire for her, as one of her wings is badly broken. She will not have an easy time getting away without her wings. That is until cyborg, Guy, shows up to rescue her. He has to rely on everything his cybernetics will give him to survive the Ka-Tê. He then takes her to Cybermed to see if they can save her wing, which is torn almost completely off.

I also need to add that Solia studies languages. She has an implant that helps her to understand all these different languages. She is the first person to survive the Ka-Tê and she understood their language, even if she doesn’t have the ability to speak it because her throat just isn’t set up to make those sounds.

This is a really sweet story. Both characters have a run of bad luck, but coming together brings some light. It does take them a while to figure each other out. Guy is convinced that no one can love a cyborg who leaves for months for missions. Plus, Farian mate for life, she Solia isn’t going to give him a chance. Solia has feelings but doesn’t think Guy is interested because he’s so cold to her.

There is also a very cute cat named Mittzi because she has four white feet with a gray body. She helped to soften the story.

This was a cute story. I now want to go back and read the early books in this series. This one is a bit dark at the beginning, but we get past that pretty quickly, so don’t let that part at the beginning scare you off. If you like sci-fi romance, this is fun story.

18 responses to “Review: Rescued by the Cyborg by Cara Bristol (@mlsimmons, @CaraBristol)”