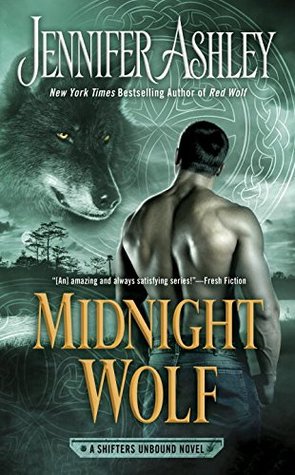 Angus Murray, bouncer for a New Orleans Shifter bar, is sent to round up an elusive, Collar-less Shifter woman, Tamsin Calloway, who is causing trouble for Shifter Bureau, and possesses information they want. If Angus refuses, he risks losing his cub. He finds Tamsin but she's slippery and not about to be rounded up quietly.

In fact, quiet is nothing Tamsin will ever be. She leads Angus on a wild chase, but he's determined to bring her in to save his son.

Can Tamsin convince Angus she's worth helping before she's locked away by Shifter Bureau, Collared, or perhaps killed?

Shifters Unbound is one of those series that I am determined to read all of them. The author is very prolific so even though this is only book eleven, there’s also been several novellas that I have read. You don’t have to read them in order to enjoy them, but it probably couldn’t hurt. I’ve managed to read a few out of order, including this one, and it really hasn’t made that much of a difference.

Angus is a wolf shifter that works as a bouncer at a nightclub catering to human and shifter clientele. When an agent from the shifter bureau comes one night to inform him that he has to track another shifter, Angus is not happy. And he’s livid when he finds out that they are using his son as leverage to make him comply. Tamsin is a collarless shifter alone in a world that is very unforgiving to shifters. It’s illegal to not wear the collar and Tamsin has been defying that for a very long time. At one time, Tamsin knew Angus’s brother-before his brother was killed for being a rabble-rouser against the shifter bureau and anyone that would collar shifters. When these two meet the book becomes not only a road trip, but also a huge adventure. Because even though she’s wanted by the shifter bureau, we all know he’s not letting her go anywhere. After all, these books are romances, so no spoiler there.

Tamsin was such a fun heroine. She’s not going to let anyone take her down, least of all someone acting on behalf of the shifter bureau. She’s smart, wily and sassy as they come and she runs circles around Angus at times. Problem for her is that Angus is highly motivated due to his son. Angus is quiet, enigmatic and only actually cares for one thing in the world, his young son, Ciaran. As far as Ciaran? He won my heart immediately and I absolutely loved his character. He has a huge role to play in this read, so I really enjoyed that.

Usually these books take place in a shiftertown. While Angus is a member of the the New Orleans area shiftertown, this book only barely touches on shiftertown life. That’s because as I said before, the book ends up being a road trip of sorts and they travel all over the South. It also ends up being very different in the choices of where they choose to hide. That part of the book was my favorite part, but because of spoilers I am going to leave it at that.

The authors fantastic world building continues in this book. All shifters have to be registered and collared by the shifter bureau. The collars keep shifters from acting violently by shocking them. The collars are powered by fae magic making the shifters biggest enemy the fae. They must live in regulated shiftertowns, are kept from owning much in the way of technology and live very modestly.

These books are always well plotted along with wonderful romances, several of which feature human/shifter pairings. This book wasn’t that, but it still worked beautifully. I honestly think this is one of my favorites due to the places they choose to hide and also due to the character of Ciaran-as well as the romance between Angus and Tamsin. I highly recommend this book to adult paranormal romance readers.

I received a copy of this book from the publisher by way of NetGalley in exchange for a fair and honest review.