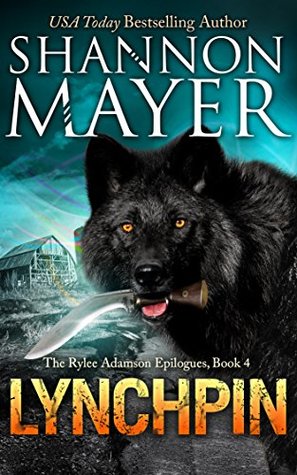 From HiJinks Ink Publishing & Shannon Mayer comes the final epilogue to the USA Today Bestselling RYLEE ADAMSON NOVELS. With over 1.4 million books sold, Shannon Mayer proves once again she can dominate her genre right out of the gate.

My name is Alex, and I am a werewolf. As a boy, I was trapped halfway between human and wolf. Rylee rescued me and I became the first outcast to join her pack.

In the Battle Against Orion, I sacrificed my life for hers and became the pillar which holds the Veil separating the human world and the supernatural world, closed. I kept the demons from spilling into the human world and left Rylee and our pack behind to live on.

But something is calling me back to the land of the living and the journey to get there terrifies me. I must pass through the darkest levels of the Veil to prove my worth, and will come face to face with my past and all of those I've lost along the way. My deepest fear is that I'm not strong enough and I will prove unworthy.

If I don't at least try though, I'll remain forever with the dead and separated from my pack.

Eternity is a long time, but this decision and journey may very well tear me apart before I reach either destination. May the gods have mercy on my soul.

If you’re going to bring a character back from the dead, this is how you do it! I approached LYNCHPIN with a certain amount of trepidation because this isn’t the first time that Shannon Mayer has played God (different series), and the previous occurrence didn’t exactly sit well with me. But, there’s no loop hole here, Alex must claw his way through the seven layers of the Veil to rejoin the living, and it was one hell of a climb.

This book takes place six months after BLOOD OF THE LOST, so I really can’t stress enough that you need to read the ten RYLEE ADAMSON novels and three epilogues before attempting this volume. This installment was an eye opener in a lot of ways which was great. We discover how Alex & Rylee met, get the 411 on his family, and learn about the anatomy of the Veil. All things that I’ve been pondering for far too long, so it was a relief to finally get answers.

The seven layers are as follows: 7. Demons 6. Heroes 5. Prison 4. Library 3. Ghosts 2. Past / Present / Future 1. Castle. Naming them off isn’t overly spoiler-y, but will give you a general idea of the obstacles that the protagonist will face. The blurb also does a fair job of surmising the story, so put those two together, and you should be able to get a clear picture of what’s in store.

Here’s the rub, I found that a lot of the secondary impediments were too easily overcome. Alex’s twisted state? Magicked away. His father’s past transgressions? Forgiven. Luca’s stubborn opposition? Frenemy. Given the magnitude of the task at hand I felt like these tangents were overkill. It’s as though the author wanted everything to work out perfectly for the hero, but didn’t want the book to be too long, so cue cop-outs.

LYNCHPIN marks the end of the RYLEE ADAMSON EPILOGUES, however the real conclusion is still to come.

One response to “Review: Lynchpin by Shannon Mayer (@TheShannonMayer, @HiJinksInk)”