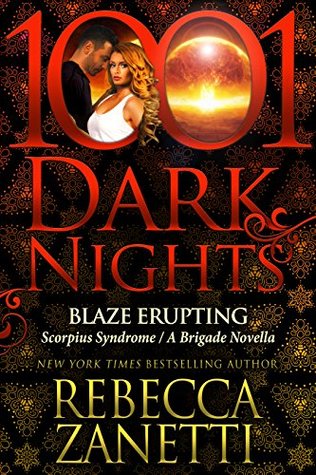 Hugh Johnson is nobody’s hero, and the idea of being in the limelight makes him want to growl. He takes care of his brothers, does his job, and enjoys a mellow evening hanging with his hound dog and watching the sports channel. So when sweet and sexy Ellie Smithers from his college chemistry class asks him to save millions of people from a nuclear meltdown, he doggedly steps forward while telling himself that the world hasn’t changed and he can go back to his relaxing life. One look at Ellie and excitement doesn’t seem so bad.

Eleanor Smithers knows that the Scorpius bacteria has and will change life as we know it, but that’s a concern for another day. She’s been hand-picked as the computer guru for The Brigade, which is the USA’s first line of defense against all things Scorpius, including homegrown terrorists who’ve just been waiting for a chance to strike. Their target is a nuclear power plant in the east, and the only person who can help her is Hugh, the sexy, laconic, dangerous man she had a crush on so long ago.

**Every 1001 Dark Nights novella is a standalone story. For new readers, it’s an introduction to an author’s world. And for fans, it’s a bonus book in the author’s series. We hope you'll enjoy each one as much as we do.**

Scorpios Syndrome is a favorite series. I really love this world that Rebecca Zanetti has created. If you’re not familiar with this world, there is a bacteria that is killing people. Some people survive after contracting Scorpios, but many don’t. The ones that survive are sometimes different. There are people anywhere from just becoming psychopaths others really losing their minds and don’t even act human anymore.

In this novella, we spend some time with a different group than we have been in the full-length books. It also takes place earlier in the series. So you can read this book without knowing anything about this series.

Here we have Hugh and Ellie. They were a couple years ago in school, but it has been ten years since they were together. Now, Hugh works to keep America’s nuclear plants safe from terrorist. Ellie is a computer genius working. Ellie is currently working with the Brigade, “which is the USA’s first line of defense against all things Scorpius”. Now Hugh is working there too. He knows the best ways to protect those plants. They want to keep them up and running and more importantly, keep terrorist from blowing them up and radiating the countryside.

However, because of some undercover work that is classified, Hugh isn’t trusted by the team. But they are trusting him a bit, because no one knows more about these plants and the terrorists that might target them than Hugh.

This is a nice second chance romance (not a trope I love, but I don’t mind it. I know some people love it). There is also a great suspense story. It is a great introduction to this series that I really love.

Her heart started to beat faster. This was the worst time in the entire timeline of humanity to start a real romance. Well, except during the plague. No. Scratch that. This was worse. Especially since she now had a beyond dangerous job, and he seemed hell-bent on protecting her. There was no protection these days.
There was a whole lot of planning and even more luck. That was it. “You need to take a breath.”
His grin was oddly determined. A little intimidating. How strange. Especially since the look he gave her sent little tingles through her entire lower body.
“I’m breathing just fine, baby. I understand you’re scared,” he said.
“I’m not scared,” she retorted like any eight-year-old challenged on the playground. She cleared her throat, trying to look like an adult, damn it. “I’m just being realistic.”
“I’m not gonna hurt you, Ellie Mae,” he said, his voice gentle. “Not you. Feel free to fall hard.”
She blinked. Once and then twice. Was that arrogant? She mulled it over, watching his implacable face. Wait a minute. Hell yes, that was arrogance. “While I like confidence as much as the next girl, give me a break. You’re not that irresistible.” Yeah, right. She was getting better at this whole lying thing, though.
He pressed his lips together, and it took her a second to realize he was trying not to chuckle.