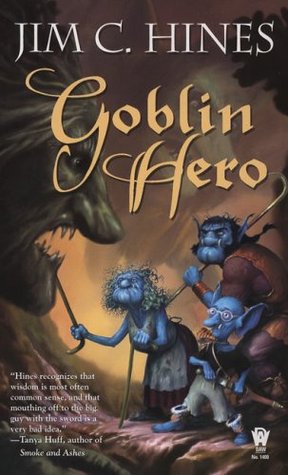 After barely surviving an adventure he never wanted, the scrawny little nearsighted goblin called Jig is now known as Jig Dragonslayer, and has the power of healing, thanks to the forgotten god he worships. But being a hero isn't all it's cracked up to be. Not when the goblin leader wants him dead, and everyone else actually expects him to keep doing heroic-and incredibly dangerous-things.

Jig’s life has gotten better since he returned from his adventure in the previous book. He is known as Jig the Dragonslayer. He is still worshipping his god, Tymalous Shadowstar, forgotten god of the Autumn Star. He talks with Shadowstar and the god helps him heal the goblins when they injure themselves. Jig still just tries to hide, but now he is hiding in his temple. He is still a runt, so he doesn’t want to tangle with larger goblins. He does have better clothes and even boots now. He got some spectacles to help with his nearsightedness. There is even a song about him. Things are going okay for him. That is until an ogre comes looking for him.

So something has been killing and terrorizing the ogres who are living near where Straum the now deceased dragon’s lair. If this thing is able to kill ogres who can the ogres turn to, well, Jig the Dragonslayer, of course. The goblin chief decides she’s going to send two goblins to help Jig. The first is Braf. He is a large goblin, but isn’t the sharpest tool in the shed. He is even known for being one of the dumbest of the goblins. The second is Grell. She is one of the oldest of all the goblins. She walks with a cane. It doesn’t take Jig long to figure out that the chief sent these two along to kill him. The chief is scared of Jig and wants him dead, but won’t challenge him herself.

There is also Veka. She is a large goblin, sometimes referred to as Vast Veka. She wants desperately to be what Jig is. He’s a hero and a wizard, at least in her eyes. She found two books The Path of the Hero and a spell book. She wants to become a hero and she plans on following The Path of the Hero to the letter to get there. Since a hero is supposed to turn down the first request to go on an adventure (as Jig did before he became the Dragonslayer), she refuses to help the ogres, but quickly follows Jig and the other two goblins.

Veka also takes up a sidekick in a hobgoblin named Slash. He was a guard that she talked into going with her. He isn’t a bad guy, but faints at the sight of blood, which isn’t a good thing for a guard.

This is another fun story of Jig’s adventures. He is nothing special, but doesn’t give up and uses his head to find a way through tough situations. He is also willing to use the strengths of those around him to the advantage of everyone. Jig, unlike most goblins, isn’t out for just himself. He really wants to see what is best for all goblins. The help of his god, Shadowstar, is always helpful, though the god seems to get him into trouble too. The god has a plan, but Jig isn’t quite sure what that is at this point.

Jig rubbed his forehead. “If you’ll give us a little more time, we’d be happy to finish incapacitating ourselves, and then you can do with us whatever you’d like.”

So what aren’t you telling me?
A faint tingling of bells filled the air: the sound of Tymalous Shadowstar’s laughter. Haven’t you ever noticed? In all the songs and all the stories, adventures so often come in threes?
Jig gritted his teeth. I hate you.
More bells, then silence. Shadowstar was gone.
Jig reached up to pet Smudge. He had no doubt Shadowstar was right. Shadowstar was always right about things like that.