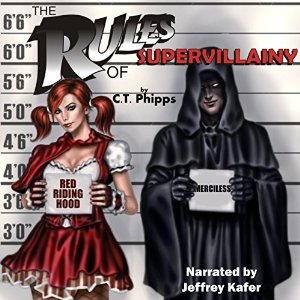 Gary Karkofsky is an ordinary guy with an ordinary life living in an extraordinary world. Supervillains, heroes, and monsters are a common part of the world he inhabits. Yet, after the death of his hometown's resident superhero, he gains the amazing gift of the late champion's magical cloak. Deciding he prefers to be rich rather than good, Gary embarks on a career as Merciless: The Supervillain Without Mercy.

But is he evil enough to be a villain in America's most crime-ridden city?

Gary soon finds himself surrounded by a host of the worst of Falconcrest City's toughest criminals. Supported by his long-suffering wife, his ex-girlfriend turned professional henchwoman, and a has-been evil mastermind, Gary may end up being not the hero they want but the villain they need.

This book came on my radar when I posted my review of Villain’s Rule by M.K. Gibson read by Jeffrey Kafer. Melissa @ My World…in words and pages, who saw that review on Twitter, pointed out this book to me. I’m so glad that she did. It was another really fun listen for me.

So, The Rules of Supervillainy is an interesting story. It focuses on Gary Karkofsky. Gary is just a guy, until he finds a package. It turns out to be the cloak of the newly deceased superhero. Now Gary isn’t the superhero type. He is more of the supervillain type, so he decides to use the cloak for bad instead of good.

So, Gary decides to go in and break of a bank robbery for his first villainous act. He stops the bank robber and even kills some of them, which sounds good right? But he makes off with the loot instead of letting the bank have it back.

He then takes a call from the police chief. A rich man’s daughter is kidnapped. The police chief wants the cloak-wearer to help. Gary, aka Merciless: The Supervillain Without Mercy! (which his sentient cloak reminds him is redundant). Gary agrees, but wants the reward that was offered.

Back to the cloak. It is sentient. The cloak knows a lot from being worn by superheroes over the many years. It keeps that knowledge as it moves from one wearer to another. Merciless is the first supervillain to wear the cloak, and this isn’t something that the cloak likes. It wants to see Gary help people. Luckily, Gary isn’t all bad. But you can feel the cloak’s dismay sometimes.

I won’t go into the whole story. Just know that this is pretty funny. There some really funny villains that Merciless fights, like Ice Cream Man and the Malt Shop Gang who shoot acid ice cream and freeze rays and Typewriter, who actually wears a typewriter on his head.

Then there are two characters who turn on their boss to takes sides with Merciless. Cindy Wakowski a.k.a Red Riding Hood. Cindy and Gary knew each other before becoming villains. They even had a fling back in the day. Gary is now happily married though. There is also Diabloman, who was at one time the most notorious villains of all time, until an ailment made it difficult for him. He is now acting as a henchmen for bad villains (as in not very good at their job), that is until Gary offers to pay him to mentor him in villainy.

This was a great start to a series. There are plenty of laugh out loud moments. I’m excited to pick up the next book in the series (which I’ve already downloaded).

Narration
So the first full-length book that I listened to with Jeffrey Kafer is very similar to this one. They are both funny books about villains. I was a little worried when I first started they would sound the same. However I needn’t be worried, he tackled these two stories completely differently. With Villain’s Rule, Jackson Blackwell is a very dry character that Jeffrey Kafer voiced very dryly. Gary Karkofsky in not a dry character, so Jeffrey didn’t voice him dry at all. He does a great job with women’s voices. I just love how he took two books that were very similar in premise, but he tackled them in a very different manner.