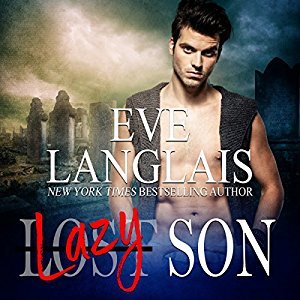 The problem with being born with expectations is the failure to live up to any.

Christopher might be the antichrist but taking over the world and leading the minions of darkness sounds like a lot of work. And while slacking is a sin his supposed dad Lucifer approves of, his lack of goals is a problem.

Personally, Christopher would rather just work hard enough to make ends meet—and maybe buy a six-pack. But fate is conspiring against him. For some reason the dead won’t stay in the ground, apparently he’s not an only child, he has sisters and this hot chick he met in the cemetery refuses to sleep with him.

It’s time for this lazy prince in waiting to rise to the occasion and embrace destiny—or at least make out with it.

This series is set in the same world as Eve’s Princess of Hell and Welcome to Hell series. That being said, you do NOT have to have read either series before starting this series (this actually takes place prior to either series, per Eve’s Facebook post). This story stood alone just fine. You will get to meet Muriel, Bambi and Lucifer from the other series. There is also Isobel who had a small part in Wickedest Witch, (which sadly I haven’t read yet)

So Christopher is raised on Earth as part of a cult. His mother has always treated him special, but not like most mothers treat their kids special. Christopher has been told that he is the Antichrist (I guess that is pretty special).

So Chris has grown up believing that he is the son of the devil, but everyone knows that the devil only has daughters. Isobel is a witch. They meet in a cemetery that Chris is staying at as the groundskeeper and grave digger. Isobel wants to say her respects to a friend. Only then zombies start to rise. As in a lot of zombies, and Chris and her fight them off. How can things not turn into a relationship after a meeting like that.

This is a really fun story, exactly what you would expect from Eve Langlais. It is full of laughs. I really enjoyed meeting Christopher and Isobel and seeing how they come together. There is a cliffhanger ending. I’m really interested in seeing where Eve takes the Hell’s Son series. I’m such a big fan of the Lucifer books. I just hope now that Chris has finally met his son, we will get more of Lucifer in the next book (there will never be enough Lucifer in any book for me).

Narration
This is my first book with Tyler Donne. I really liked him. He was perfect for Christopher. He really knew how to bring out the humor in Eve’s story. I also thought he did well with the female voices in the book. There are some great accents in this book. I was a little surprised by Lucifer’s voice. It wasn’t bad, but just not what I was expecting. I haven’t listened to any of the series that feature Lucifer before, so this is my first time hearing him. Again, not bad, just caught me off guard at first.