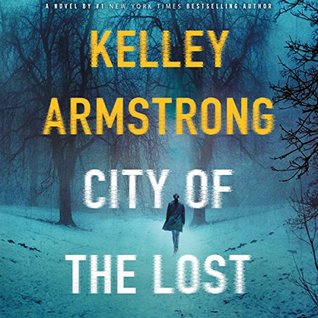 Casey Duncan is a homicide detective with a secret: when she was in college, she killed a man. She was never caught, but he was the grandson of a mobster and she knows that someday this crime will catch up to her. Casey's best friend, Diana, is on the run from a violent, abusive ex-husband. When Diana's husband finds her, and Casey herself is attacked shortly after, Casey knows it's time for the two of them to disappear again.

Diana has heard of a town made for people like her, a town that takes in people on the run who want to shed their old lives. You must apply to live in Rockton and if you're accepted, it means walking away entirely from your old life, and living off the grid in the wilds of Canada: no cell phones, no Internet, no mail, no computers, very little electricity, and no way of getting in or out without the town council's approval. As a murderer, Casey isn't a good candidate, but she has something they want: She's a homicide detective, and Rockton has just had its first real murder. She and Diana are in. However, soon after arriving, Casey realizes that the identity of a murderer isn't the only secret Rockton is hiding—in fact, she starts to wonder if she and Diana might be in even more danger in Rockton than they were in their old lives.

I started out a Kelley Armstrong fan when I read Bitten many years ago. I was a faithful reader of The Otherworld series. I was very sad when it ended. I had, however, already read Armstrong’s Nadia Stafford series, so I was very aware of her ability to write suspense without any paranormal aspects to it. I finally got around to starting this series about Casey Duncan. I shouldn’t have waited so long.

Casey Duncan is a homicide detective with a past. Her best friend is running from her ex. Her friend, Diana, is aware of a town for people to hide away from the world. They are also in need of a homicide detective in this town because they have a serial killer, so Casey is able to get the council to allow both her and Diana a spot in the town.

Once Casey arrives in the town, things really get interesting. We meet the sheriff, who is a real piece of work. He raised in the town and one of only a handful of people who isn’t forced to leave after their maximum of five year stay in Rockton. He doesn’t care what anyone thinks of him.

There are a ton of really great characters in this book. The deputy, the bar owner, the doctor and the liaison with the counsel are all interesting characters. I also love the town. Rockton is a small town in the Yukon. No one knows it exists. They live mostly off the grid. They do have generators, but they don’t use them much. They try to grow and hunt as much food as possible and the sheriff flies in supplies from outside the town.

There are also some people who live outside of the town in the forest. They are separated into two groups, the settlers and hostiles. The settlers are people who mostly once lived in Rockton, but left to live outside of town, rather than go back to the real world. There are also the hostiles. They live outside the town, but they aren’t just people living off the grid, they’ve gone feral. They rarely bathe, they kill and some even believe that they eat people.

Casey is tasked to find the person killing the townsfolk. Her and the sheriff look into the backgrounds of the townsfolk, but also consider the settlers. She is also trying to deal with Diana who is not happy with not being the most important person in Casey’s life.

This is a fun suspenseful story. I loved the cop dynamic of the investigation. It gave me a chance to learn about all the townspeople, without it feeling like a huge info dump about characters.I was surprised when I learned who the real killer was.

The only thing that I would really fault this story for is that Casey develops a love interest before she leaves to go to Rockton. I didn’t really understand the point of it, since she leaves and can’t go back for a minimum of two years. Now that being said, I don’t know if he becomes a player later in the series.

Narration
I really love Therese Plummer. She does a great job with the narration of this series. I love all the voices she chose to use. The voice for the grumpy sheriff was just perfect. There is also the voice for the bar owner and madame (yes prostitution is legal, much to Casey’s dismay). The voice of the flurty deputy was a good one too.