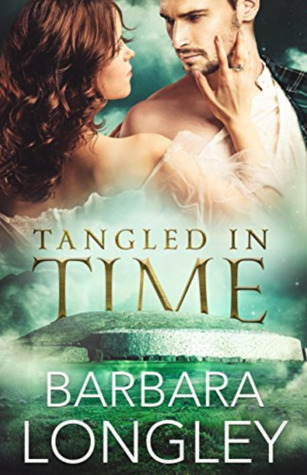 To set him free from an ancient curse, she must travel to a time of myth and legend…

Regan MacCarthy’s ability to see ghosts is a gift inherited from her Irish ancestors, but it’s one she’d dearly like to give back. In an attempt to return her powers to their source, she travels to Ireland to harness the ancient magic that still permeates the mystical site of Newgrange. Instead, something far more unexpected awaits her: a strapping, gorgeous stranger who insists he’s a centuries-old Celtic warrior.

Fáelán was one of Fionn MacCumhaill’s elite soldiers before being cursed by a resentful fae princess. The only way to free himself is to fall so deeply in love that he’d sacrifice his life. Not an easy matter when he’s invisible to most. Yet Regan sees him—not just the proud, handsome warrior on the surface, but the complex man beneath. Only when it’s too late does Fáelán realize that drawing this beautiful mortal into his world has endangered them both, and may destroy the happiness he’s waited an eternity to claim…

Time Travel romances were a favorite read of mine probably twenty years ago and like anything you read a lot of, I got burned out on them. I have read a few others over the years, but haven’t gotten hooked back into them. However, when I saw this book on Net Galley in exchange for a fair and honest review, I decided to try again.

Regan is a young woman with an agenda. She has quit her job in America and has moved to Ireland for a year to try and find a way to get rid of her problem. Her problem? She sees ghosts and can help them move on. She’s so tired of seeing them everywhere and of them constantly being in the background bothering her. She has two sisters who also have magic, but they don’t have to talk to the dead like she does. Her first stop is a mystical place that she goes to at dawn her first morning in Ireland. Hoping she can tap into the magic of the place, she tries to meditate using yoga. She taps into something alright, but not what she’s expecting at all. Faelan is cursed to living alone in another realm than humans, although he can cross over a bit while at the magical place. Seeing Regan in what he considers a scandalous pose, in even more scandalous clothes(yoga pants)he can’t take his eyes off her. When Regan sees him, all she can think is, Oh No anther ghost. And she won’t believe him when he tells her he has been cursed by a fae princess a few thousand years ago. The curse won’t lift until he falls in true love with someone and well..you can see where this is going.

I found this to be different from most time travel romances in that it’s mainly about Faelan’s curse. And he’s immortal as long as the curse lasts, so he’s not traveling through time. There is a time travel component, but it’s really only a small part of the book. A very small part-but necessary. Faelan comes from a time of superstitions and belief in magic. I think it’s like the year 300 bc. The fae in this story can go to any time period they want. And cause havoc in any time period as well.

I did like the characters when I wasn’t mad at some of Regan’s actions. Her disbelief in Faelan not being a ghost went on a bit too long despite so much proof to the contrary. I know it would be hard to grasp for anyone, but she has so much experience with magic, I thought she would get it faster than she ultimately does. On Faelan’s part, we meet him in the now and at another point, we meet him back in time. He’s a good guy, smart, handsome, and he falls hard for Regan. Regan falls as well, but of course that’s a given in a paranormal romance. But things are never easy and so much more happens than just a romance.

A curse, a time travel component, a good romance, the Ireland setting, and the fae causing problems, all added up to a pretty good time for me. Oh, there was a plot hole from fairly early on in the book that I am still a bit wondering about, but that’s pretty much expected when dealing with magic, time fluidity, and a curse. It’s a wonder there weren’t more. That the author was able to deal with all of that and still have believable characters and a good romance was a plus as well for me.