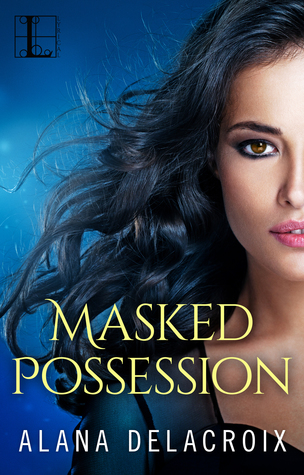 A Man Who Can Wear Any Face

Caro Yeats doesn’t run from much. As a former investigative reporter now working PR for Toronto’s supernaturals, what she hasn’t seen mostly isn’t worth seeing. But the assignment to “rebrand” Eric Kelton’s out-of-control alter egos has her on edge from the start. Kelton is the heirarch of the Masquerada, beings able to change their face—their entire persona—on a whim. Eric’s charisma muddles her instincts. How can she trust a man who can become anybody?

A Woman Without A Past

Eric has never met anyone like Caro, with her lightning wit and uncanny insight. But desirable as she is, he’d be a fool to let her near. Struggling to hide the sudden loss of his powers, Eric can’t risk becoming entangled with a woman who scorns her supernatural side and claims not to play politics. The enemies on her trail are strong, clever, and vicious. And when they force Eric and Caro together, the fallout could shatter far more than two hearts . . .

I first saw this book at Caffeinated Book Reviews. I really liked the sound of it. It was different from what I’ve read in the past. It was a completely new type of supernatural creature (at least to me), which are hard to come by anymore. It was still available for request on NetGalley, so I requested it and was excited that I was approved.

This story is about Masquerada. They are a type of supernatural species that can take on not just different faces, but entire personas. So they in essence become different people. Depending on how powerful a Masquerada is, will determine how many different “people” they can be in their lives. Some can only be a single person (not counting their actual self). Others can have several. Some can be either or both sexes, others can only be the original sex of their original self.

Eric, the hero of this story, is the leader of Masquerada. He has several personas. And this causes him some problems. He has stretched himself to the limit and now he is endanger of converging. Convergence is something that every Masquerada is terrified of. A Masquerada going through convergence can end up with too many sets of arms or heads or whatever as their bodies have difficulties with all their personas.

Caro is the heroine of the story. She works for a PR firm for supernaturals. She is half Masquerada, but doesn’t share that information but with a select few. She’s never really be a part of that community. She actually has a few problems with the different personas after being raised by a mother who “changed masques the same way other women changed clothes”. She is called in to help solve Eric’s problem.

I found this book to very refreshing. Yes, there are still vampires, shifters and fey, like you see in most supernatural stories, but the addition of the Masquerada was really interesting. I liked the characters in this story. I also liked that there was more than just Eric and his convergence issue. There is also a villain who was very well written. I loved the suspense in this story too.

I’m really happy that Kimberly put this book on my radar. It is a story that I think any UF or PNR fan would enjoy. I’m going to be keeping my eye out for the second book in this series. I can’t wait to see where the series goes from here.