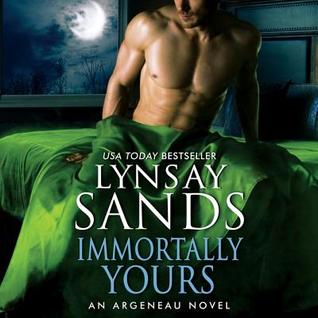 One hundred and twenty-five years is a long time to nurse a crush. That's how long it's been since Beth Argenis first met Cullen "Scotty" MacDonald and he instantly became the star of her most X-rated dreams. Back then he was rescuing her from a Rogue Immortal. Now Beth's a Rogue Hunter - a damn good one. She doesn't need saving anymore, despite what Scotty thinks. What she does need is the fierce, wild desire that finally erupts between them.

Scotty has hesitated to claim Beth as his own. But one explosive kiss confirms what he's long suspected: She's his life mate. But Beth is tough, fearless, beautiful...and in immortal danger. Unless he wants to lose her forever, he'll have to rethink everything he once believed about love and destiny as well as confront an enemy who's terrifyingly close.

Lynsay Sands Argeneau series, is simply put, a fun time. I know I say that every time I read one, but it’s true. I have been reading them in a kind of weird order, starting at the end of the series first and then continuing on from that point-and also, going back to the beginning and reading some of those as well. I find the oldest ones to be lighter in tone than the newer ones. The newer books are more exciting with plenty of action. All of them feature some humor and lots of romance. This one is book 26 and was definitely exciting, full of action and romance, and had some humorous moments as well. So it fit right in.

Beth Argenis is a highly trained rogue hunter. Rogues in this world are immortal vampire like beings that once turned, go off on their own, indiscriminately turning humans and feeding off and killing humans. Beth is immortal and was also turned, not born to this world, around 125 years before. She is beautiful and looks to be in her mid twenties. She’s headstrong when it comes to saving innocent humans from rogues. Scotty MacDonald is of course, from Scotland, but came to Canada recently to help out the Argeneau family since so many of their people are out on assignment. He’s known Beth since she was turned and shows up in her life quite often. He’s a fierce rogue hunter and any time he’s around, Beth has X-rated dreams starring him. As he does about her as well. This is what life mates do. Beth is seemingly unaware of this, but Scotty is over eight hundred years old and he is well versed in life mates. He also has no intention of claiming Beth anytime soon. And he does have his reasons, however poor they are. There’s also plenty of other characters featured this time. Donny, a young trainee rogue hunter, served to add quite a bit of humor to the story. An immortal, affluent Russian princess with human feeding issues is also introduced. Good Characters!

This time around, Beth is being targeted by someone and gets put into lots of bad situations. While this is going on, the hunters are also being tasked with problems they have to take care of or get rid of. Through it all, Scotty tries to ignore Beth-all the while trying to keep her safe at the same time. At times, I really wanted to throttle him!

As always, I enjoyed the romance and the back story of Beth was pretty fascinating to me as well. The story took us back into history and that really added to this installment for me. Sand’s world building has always been interesting to me, with the use of Atlantis for the reasons behind their immortality. She doesn’t do a big info dump, but manages to work just enough information into the story for those people newly reading about this world. Very much appreciated by me!

An immortal reluctant to claim his life mate, a mysterious villain determined to kill Beth, dangerous cases that the group is working, and great characters, all came together to form this good read, or in this case, listen. Narrator, Michael Rahhal, did an amazing job with accents and his female voices were actually quite well done. One particular funny scene featuring Donny and coffee was done so well by the narrator that I was laughing out loud. So narration was a five star for me.

This series is a must read/listen for me. I am slowly adding books to my tbr pile and will keep reading them until I am able to catch up. There are some series where that wouldn’t be that easy of a thing to do, but this one is a breeze for me. I know that when I start one of these I will be entertained and at times kept on the edge of my seat. Highly recommended to adult paranormal romance fans-adult due to steamy scenes and violence. Thank you to Harper Audio for a copy of this in exchange for a fair and honest review.