Seattle P.I. with a Very Special Skill for Hire

Valentine Investigations believes you. We’ll help you get the justice you deserve.

I’m Valentine Shepherd, owner and operator of Valentine Investigations with my best friend, Stacey. We handle all manner of problems, but sex crimes are our specialty. I’ve got an edge that no other P.I. in the world has, let alone any in the Emerald City. Since we live in woke times, I’m going to be completely honest with you and tell you my crazy, unbelievable secret:

I can see the future when I have sex.

No, I’m not kidding. Instead of the big-O at the climax of lovemaking, I go into a trance and see flashes of future events—mostly death and mayhem for reasons only God knows. My strange condition, I guess you could call it, is terrible for my love life. Who wants a girlfriend who’s always passing out during sex, right? When I was younger, I got tired of seeing future death and destruction where the Grand Finale should have been. I considered giving up making the beast with two backs altogether, especially when I found that changing the future is technically possible, but very difficult—I’ve only been able to do it a tiny handful of times. However, it eventually occurred to me that what might be a terrible experience for me is actually great for you!

I can literally use sex as a weapon. And if that fails, my stint in the Army gave me the skills to punch answers out of people, and then shoot them if necessary. Either way, I’ve got what you need.

So give Valentine Investigations a call. Let me be your fist of justice—in and out of the bedroom! 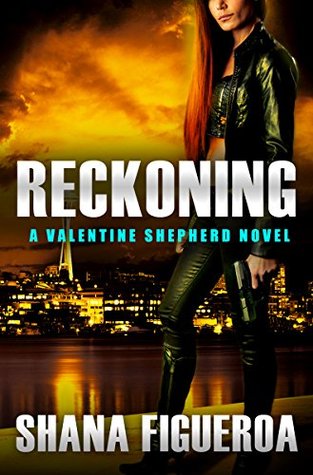 Val sat at the foot of the bed, sipping coffee and watching Max futz with a tie in front of the bedroom mirror. From the first floor, Lydia’s laughter reached them through their closed door. Hopefully that meant the kids were already warming up to Jamal.
“You’ve never heard of a group of guys who go to a secret smoking room or possible sex club after work, have you?” she asked.
Max’s hands stopped. He looked at her through the mirror, an eyebrow cocked. “You’re kidding, right?”
“Is that a no?”
“Yes, that’s a no.”
Thank God. She probably wasn’t dealing with an evil sex-slash-faith-healing cult again. Chances seemed slim, anyway.
He continued knotting the purple silk around his neck. “Is this related to Lacy Zephyr’s visit a couple days ago?”
“Maybe. Yes.” She’d told him Lacy came by, but had kept the details to herself out of respect for her first client in about half a decade. Now she realized she couldn’t get Max’s help without bringing him fully on board. She’d tried keeping him in the dark once before, during her investigation into Blue Serpent; it had turned out disastrously for them both. The specter of Lacy’s disapproval could take comfort that Max was good at keeping secrets. “How well do you know her husband?”
“Aaron? Not well. I see him at meetings sometimes.”
“So you don’t know what he does in his spare time, say after work?”
“No idea.”
She regarded him over the rim of her mug, drumming her fingers on the sides of the ceramic.
Max straightened his tie, glanced at her in the mirror, and frowned. “Don’t even ask.”
“Please?”
“No. Aaron and I aren’t friends.”
“But you could be.” Lord knows he could use more friends. Of course he could say the same thing about her, especially since Stacey took off five years ago for destinations unknown, but this wasn’t about her.
“I’m not palling up with someone I barely know just to find out what he does after work.”
“Okay, fine.” She took another slurp of her coffee. “Could you at least find out what his schedule looks like over the next week or so?”
Shoving the end of the tie under his vest, he turned to face her and shook his head.
“Then I’ll have to spend all day and night staking him out. Don’t know how long that’ll go on for. When my mom comes to visit in a couple days, you’ve got it covered, right?”
Max’s gorgeous hazel eyes drilled into her, his lips tightened in a half-smile. Hot damn, never had bemused frustration looked so sexy. She loved twisting his screws just to get that look.
“To state the obvious, you are manipulative,” he said as he snatched his suit coat off a loveseat in the corner and slipped it on. “I’ll see what I can do, alright?”
She jumped up and kissed him, careful not to slop coffee on his suit. “Thanks. You can punish me later.”
“You bet I will.” He slapped her ass and seized her lips with his, kissing her with such force she thought he might throw her on the bed and make love to her right then. When his kiss turned her insides to liquid and she started pulling at his belt buckle, a feverish desperation for him burning in her belly, he pulled away, stepped past her, and bounced down the stairs.
She gasped, the void where he used to be like a splash of cold water to her face. “Tease,” she called after him.
He snickered the rest of the way to the first floor. Yeah, real fucking funny. She’d make him pay for that. He wouldn’t be getting any sleep tonight, that’s for damn sure.