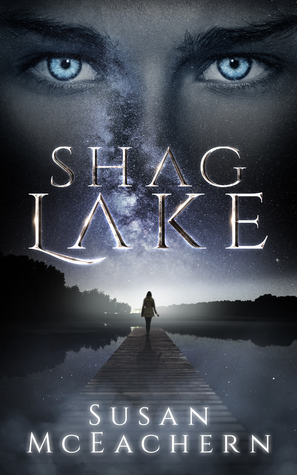 Geri McKenna hasn’t seen her brother’s best friend, Sean Eastman, since he graduated high school. Sean left their little town of Pembroke just hours after she nailed him with a kiss behind the shed, never to be seen or heard from again. No calls, no texts, no social media to stalk online.

Eight years later, Sean shows up in their hometown unannounced. Blinded by his looming height, crystal blue eyes and the guns he’s grown since high school, Geri thinks it’s just a happy coincidence that he’s back at the same time she’s taken leave from her dead-end job to come home for her brother’s wedding. It doesn’t even enter her mind that Sean’s return coincides with the mysterious disappearance of a woman in the vicinity of Shag Lake in nearby Algonquin Park.

Until she bumps into him at the crime scene.

Determined to revive her flagging career in journalism, Geri’s investigation into the missing woman leads her into the clandestine world of an alien cover-up, with Sean Eastman at the center of it all. So when he comes to take her into hiding from a corrupt shadow government that wants to permanently shut her down, Geri must decide if Sean is a trustworthy friend or one of the people who wants her dead.

Fun Fact: Shag Lake is based on Canada's own Roswell incident. Tap on the live links included in the ebook to learn all about the 1967 Shag Harbour UFO crash site.


From the minute I saw this book on Net Galley for review, I knew I was going to love it. Maybe it was all the positive and glowing reviews posted there or just the synopsis, but I knew I had to read it. And then before I could download it, Net Galley had archived it. Never fear though, when the author read my feedback, she graciously offered and sent me a copy in exchange for a fair and honest review.

Geri is a reporter for a newspaper in New York. She’s not happy that she’s stuck reviewing fashion and yearns to be an investigative journalist. It’s the weekend of her brother Mark’s wedding, so she goes back home to Canada for the event. What she doesn’t know is, her brother’s best friend, Sean, has come home after eight years of being away, to also attend the wedding. He’s her biggest crush from her high school days, and the one she has never forgotten. They shared one kiss, and he was gone the next day. So she’s very happy to see him and catch up with him. Her biggest question? Where did he disappear to and why has no one seen him since that last night? Sean isn’t what he seems, not by any stretch of the imagination. And he’s not there simply because of the wedding. He’s smack in the middle of the case of a woman that went missing at Shag Lake, not far from where the wedding is taking place. When Geri decides not to return to New York when she should, she goes to Shag Lake to investigate. When she sees Sean there as well, she knows she has stumbled onto something that could make her career. It also helps that the two are falling for each other again-even though Sean is not allowed to tell Geri anything about why he is there. No spoilers, I will just say that Sean is a major player in the science fiction part of the story, a part he must protect at all costs.

My favorite character was Sean. He’s a great guy, loves Geri, and pretty much is a total alpha male. However, he’s not perfect and his weakness is definitely Geri. He is loyal to her, even when he is being told to back off from her by his superiors. Geri was a good and very feisty heroine, however she does do things that will get her in trouble, just to get a story. To stupid to live? Nope, because she does have an agenda to better her life and she sure has no idea what she’s getting into. Big Foot, aliens, a possible murder mystery? It’s all there for her to get into, and of course it doesn’t run smoothly, at any point. Through it all, the romance was a favorite thread for me-well that, and all the science fiction elements.

If you decide to read this, you should make sure you have adequate time to read because I don’t think you will want to put this book down, once started. I sure didn’t. I found the pacing to be pretty perfect and the writing was spot on, as well. The premise was very new to me and that’s a plus anytime for me when reading. This read was filled with action, some pretty scary moments, and all of that just made for a page turner of a story for me. An incredible story, it is definitely one of my favorite reads of this year so far.