What words of wisdom would Alex Caine offer someone before their first fight?


Which of your protagonist’s abilities are the handiest when the shit hits the fan?

Alex Caine has a powerful vision that allows him to see what an opponent will do a fraction of a second before they do it. Coupled with his extensive training it makes him a formidable fighter, able to predict his opponent’s moves and be ready for them.


Does the hero of your series have a training routine that keeps him in shape for whenever Big Bads come a knockin’?

Alex Caine is a career MMA cage-fighter. He’s originally classically trained in kung fu and has subsequently cross-trained extensively in other disciplines. His training regimen is his life and he practices his arts and his meditations daily to always be ready.


If Alex could enlist the help of a character from another author’s fictional universe who would it be?

I think Alex would love to fight alongside Batman, as that guy has the skills. And maybe the superstrong half-Weyrd woman from Angela Slatter’s Verity Fassbinder series, because Verity kicks serious butt.


How do you get yourself in an “action” frame of mind whenever you’re writing a particularly adrenaline-filled scene?

I’m a career martial artist myself (I run my own kung fu academy) so I’m always in a fighter mindset as I teach and train almost every day. But if I need geeing up a bit more, some classic kung fu movies usually get me going.


There’s a lot of choreography that goes into a fight sequence; what kind of research do you do beforehand, and how do you make sure it flows smoothly?

As mentioned above, as a martial artist myself I’m well practiced in fight choreography. But it’s not unusual for me to be leaping around in my study acting out moves from a scene to be sure they work well!


If you had to choose between including only action or romance scenes in your books for the remainder of your career; which one would you pick?

Action. Because love and romance can be implied off the page, but we like our fights and action to be front and centre.

Alan Baxter is a British-Australian author who writes supernatural thrillers and urban horror liberally mixed up with crime and noir, rides a motorcycle and loves his dog. He also teaches Kung Fu. He lives among dairy paddocks on the beautiful south coast of NSW, Australia, with his wife, son, dog and cat. Read extracts from his novels, a novella and short stories at his website. 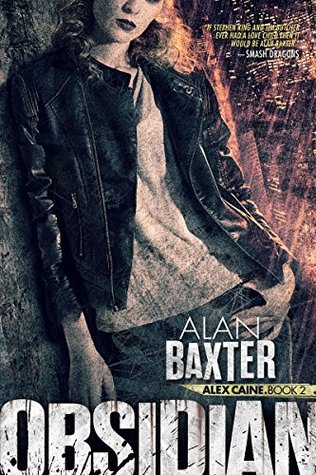 Alex is trying to rebuild his life with his Kin girlfriend, Silhouette, and deal with his newfound abilities. This doesn’t last long, as he’s soon enlisted into a clandestine operation to head off some impending doom foretold by Seers linked to Alex’s destiny.

Elsewhere, when a company called the Black Diamond lets Claude Darvill know his father has gone missing after chasing Alex Caine, Darvill decides to take up the hunt himself.

And some amateur mages in Britain’s north think they have uncovered ancient magic that will reveal unto them great powers. However, they are caught in a vortex and pulled through to a strange lost city, isolated in the void, taking Alex and company along for the ride.

Trapped in a place removed from everything they know, ruled by a hierarchy of monsters, Alex and his friends must find a way to escape Obsidian.

1 Winner’s Choice eBook of BOUND, CROW SHINE or THE BOOK CLUB (INTL)
* All entries in this giveaway will also count towards the Grand Prize Draw for a $48 Amazon-com GC *