The Power to Consent

I’ve been thinking about the nature of consent lately.

My first book, Mark of the Moon, opens with: “The skin at my wrists chafed, steel buffered by silk – but clearly not buffered enough.” Maybe you’re thinking it’s a 50 Shades rip-off. (It’s not – I wrote the line years before E.L. James took bondage fantasies into the mainstream. What can I say? Some first books take a long time to find a publishing home.) Perhaps the content made you uneasy – does visceral sexuality belong in urban fantasy? What about paranormal romance?

Dana Markovitz, my main character in the Mark of the Moon series, has a particular kind of play she enjoys with one of her lovers, Jon. There’s restraint, there’s heat – but in all instances, consent is granted before things progress. Sometimes it’s direct: tell me what you want. And other times it’s something else:


The door shut behind me.
“Are you sure?” Jon’s voice, hesitant, echoing against the exposed brick walls of his exhibition space. “I thought, with Claude—”
“No,” I said. Not turning to look. “I don’t want to talk, and I don’t want to think. Can you do that for me?”
“Yes.” Knowing what that meant. A blindfold appearing and then vanishing into black as he tied it over my eyes. Blessed darkness.
For the first time in days, since all of this began, I was able to relinquish control. What happened next was out of my hands and in Jon’s.

Dana is a woman, as a character, who doesn’t take shit from anyone. She’s a former covert operative turned bartender to the supe community and – surprise! – a newbie shifter. She also somehow manages to reconcile her presumption of equality with her craving to sometimes take a more submissive role sexually. And yet it seems antithetical for a strong woman to willingly submit to anyone – for any reason, regardless of how temporary.

In my opinion, it comes down consent.

Too many shows and movies use rape as a tool to shock or titillate viewers. The ultimate violation of a person (usually female)’s sexuality and physical sanctity.

I don’t do that. It’s a conscious decision. I believe in telling stories about women who own their power, and partners who respect their strength without feeling intimidated or resorting to passive-aggressive sniping. This is the framework of consent in my writing: a place where a woman can choose to put herself in a compromising position for as much or as little time as is right for her.

Dana Markovitz kicks ass while owning her own sexuality.

So yes, I can write with Romp-worthy steam. But in order it to work, my main character also needs to be able to Stomp.

Because consent is sexy.

Beth Dranoff lives somewhere in the vicinity of the Greater Toronto Area, Canada with her family, her dog, and more books than she can count. Is it before noon? Then there’s probably a mug of coffee nearby too. Betrayed by Blood is the second instalment in her addictive Mark of the Moon series. 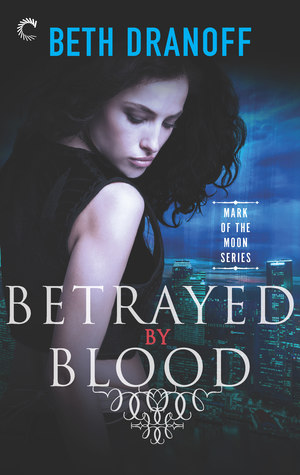 Shapeshifting. Falling in love. Two things that aren’t as easy as they look.

There are definite perks to being a shifter. Sharp claws, soft fur, sexy creature-friends-with-benefits…but other things aren’t so great. Like, say, being dragged into an apocalyptic war between the species, waged by a she-demon who wants to end the world.

Meanwhile, things are getting hot and heavy between me and Sam Harding, lieutenant in the local shifter pack. Sam is definitely the commitment type—if only I could be sure that I am, too. I don’t want to lose him, but am I ready for forever?

Yeah, when this is over, I will absolutely get my life—love and otherwise—together. That is, if I manage to live through this mess.