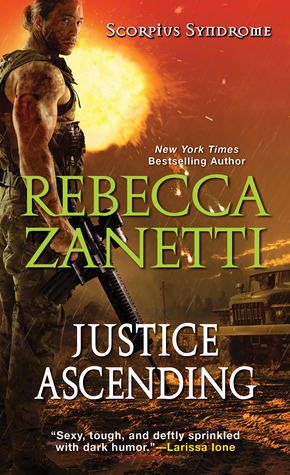 Before surviving the Scorpius bacterium, Tace Justice was a good ole Texas cowboy who served his country and loved his mama. After Scorpius, the world became dark, dangerous, and deadly... and so did he. The Vanguard medic is stronger, faster, and smarter than before, but he's lost the line between right and wrong. His passion is absolute, and when he focuses it on one woman, there's no turning back for either of them.

Sami Steel has been fighting to survive right alongside Tace, convincing the Vanguard soldiers she's one of them. In truth, Sami is a former hacker turned government agent who worked at The Bunker, where scientists stored both contaminants and cures. Only she knows the location, and she's not telling. Yet when sexual fire explodes between her and Tace, she'll face even that hell again to save him.

I’ve really enjoyed this series from the beginning. Tace is a character that I’ve loved since I met him in the first book. I’ve been a bit worried about him, since he contracted Scorpius, but learning that he was getting his own book made me very happy.

So, if you’re not familiar with this series, it is a post apocalyptic story. There is a bacteria that has been released on the world and it is changing people. Most people don’t survive if they contract this bacteria. They can survive and live a pretty normal life (as normal as a post apocalyptic life can be), if they get high doses of vitamin B. Without the vitamin B, they survivor could be high functioning, but psychopathic or they could be low functioning, almost zombie like or act like a dog or something. The current president of the US is one of these high functioning psychopaths.

Both the hero and heroine have been a part of this story since book one. Tace is former military and a field medic. He is working as the Vanguard’s medic and really their doctor (medical training of any kind is a high priority). However, he was infected and they didn’t have vitamin B at the time, and so his personality has changed since we first met him in book one.

Sami is one of the guards in Vangaurd. She has gotten herself into the inner circle with Tace, Jax, Raze and a few others. She told them she was a rookie LAPD cop before Scorpius broke out. She’s a good fighter, so that helps her out, but she isn’t a very good shot, which doesn’t. Especially when a rival group, the Mercs, start working with Vanguard and the main guy they work with is a former LAPD member.

So a lot happens with the overall series story arc. There is stuff going on with the Pure, a group of religious fanatics that thinks they were saved from the bacteria because God wants to keep them pure. Their leader has segregated the group and taken all the children with them. The Vanguard inner circle is working to make sure that everyone joined the group willingly and that the children are safe.

So a lot happens in this book outside of the romance between Tace and Sami. It is a fast paced story. There is a ton of action, but we also get plenty of romance too and not just from Tace and Sami. It was great to see Jax and Lynne and Raze and Vinnie together too.

Tace Justice read the last depressing line on the page and growled, tossing the journal across the room. When it landed, the cover slapped back into place with Hello Kitty smiling at him. Jesus. Paper was scarce, but doc could’ve found a different notebook when she’d ordered him to start journaling. Like his descent into madness really needed to be recorded by a happy cat.

Tace lifted his head, his body going into overdrive. “What happened to your mouth?” The Merc leader’s lip was already swelling nice and fat.
“Your woman kicked me in the face,” Greyson growled, gingerly touching his mouth.
Anger, the real kind, sped through Tace so quickly his ears burned. “What did you do?” He advanced.
Grey held up a hand. “Just threatened to shoot you. We didn’t touch her.”
Tace paused. A smile tickled his mouth, and warmth bloomed in his chest. “She was defending me?”
“Apparently.” Greyson frowned. “She didn’t need to kick me in the mouth though.” He shook his head as Tace started to ask the question. “Of course I didn’t retaliate. Even though it’d be a fun contest, I don’t hit women. Even mean ones who kick a guy in the lips just for making an ordinary threat against somebody not even present. God.”


She rolled her pretty green eyes. “Okay, tough guy. Sit on the table, and I’ll get Tace. He’s much better at stitching people up.”
“Tace punched me through the glass door.” Jax jumped onto the table.
Lynne paused. “Is he still breathing?”
“Yes,” Jax sighed. “He thought I made Sami cry, and he reacted, which was probably a good thing so they can get their shit figured out. So I didn’t kill him. See? I’m growing as a person.”
Lynne hustled to the counter and yanked out surgical stuff that looked pointy and painful. “You really are.”