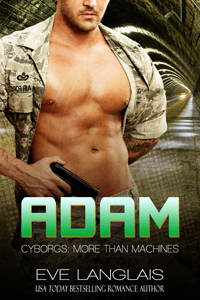 On Earth, when a rebel cyborg leader is drawn into a search for answers, he doesn’t expect things to blow up. And he’s not just talking about his house. Somehow his heart explodes, too, with the last thing he ever expected—love.

Adam survived the great cyborg purge because the military made a mistake, a mistake they lived to regret. They crossed the line when they decided to take away his free will and turn him into a machine. They erroneously thought him a slave they could command. However, their biggest screw up of all was when they didn’t terminate him at the first sign cyborgs were regaining sentience.

As the rebel cyborg leader on Earth, Adam is doing everything he can to rescue others of his kind. Part of his current, undercover mission involves infiltrating a top secret military facility where he comes in contact with a human scientist. A sexy scientist whom he’s ordered to protect.

What should have been an easy job turns into a fight for his life because it’s not just bullets and hit squads he’s got to worry about, but his heart.

How can one fragile female mean so much? It’s almost too much for a rational-minded cyborg to understand. When the choice is given, escape or let her die, he lets his heart decide, and after that, things start to explode—literally.

The Cyborgs: More Than Machines series can be read as stand alone stories, however, for total reader enjoyment and world immersion, it is recommended you read them in order.

I had to step away from the cyborg world for a little while because of other reviews that were needed. However, they insisted that I come back to them. I started several books and none of them were really fitting my mood. I guess Adam decided it was time for me to come back to the cyborgs, because I flew through this book without issue.

So, this series is a sci-fi romance. We have a new couple in each book, but there is an overarching story arc as the cyborgs continue to fight their oppression from humans. I highly recommend reading this series in order. It will help you completely understand the plight of the cyborgs. Throughout the series, we’ve learned more and more in each book what it took for cyborgs to be their own person, in this world run by humans. It doesn’t matter that the cyborgs were once human themselves, once that transition was made into cyborg (be it willingly or not), humans didn’t consider them to be equal anymore.

Adam has been living on Earth, while most of the other cyborgs have left the planet. He is undercover as a human in the military. He is working to try to rescue any cyborgs that he can find that are still under the control of humans. Cyborgs on Earth aren’t supposed to exist anymore. They all either escaped and left the planet or were exterminated. However, Adam has found a few.

Dr. Laura Cowen is a scientist. She is working for the military, but she has a soft spot for cyborgs. She doesn’t believe that the extermination should’ve happened. These were once people after all. They had feelings. While she worked by day as a good scientist, she also tried to smuggle what information she could to a rogue group looking to free any captive cyborgs.

Adam and Dr. Cowen had been working together for a while. Adam was assigned as a guard to help protect her. Little did they know that they were working together to help the cyborgs too. Dr. Cowen didn’t even realize that Adam was a cyborg until there was an attempt on her life and Adam had to really show off his non-human skills.

This is another great addition to the series. It is full of snark (because it is an Eve Langlais book, so you know there will be a high snark content), action, sexy times and just plain ol fun. This book also is leading up to the end of the series with the story of Avion. Poor Avion, who has been tortured by the human military. He isn’t doing well. I can’t wait to see what will happen in his book.

“I think we can do better than canvas. I scavenged some items.”
“In other words stole?”
“Only if you want to get technical. I call it commandeering for the greater good of cyborg kind.” He shrugged a knapsack off his shoulder and handed it to her.

Rolling a muscled shoulder, his shirt already shed, Adam laughed. “Then we’ll at least be clean.”
“You know, if this were a scene in a movie or a book, the audience would be screaming at us and calling us idiots.”
“Women might. Men, on the other hand, would be cheering because things are about to get naked and steamy.”
“Says who?”
“Says me. Strip, Doc.”
“Giving me orders now, are you?”
“Damned straight. I am, after all, the resistance leader. And I say resistance against what I plan is futile.”
“That has to be the cheesiest seduction line I’ve ever had the misfortune to hear.”
“Maybe, and yet you’re getting naked.”