Posted May 21, 2017 by Melanie in Melanie, Paranormal Romance, Reviews / 18 Comments 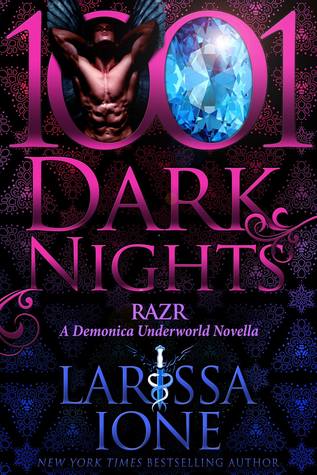 A fallen angel with a secret.

An otherworldly elf with an insatiable hunger she doesn't understand.

Meet mortal enemies Razr and Jedda...and the priceless diamond that threatens to destroy them both even as it bonds them together with sizzling passion.

Welcome back to the Demonica Underworld, where enemies find love...if they're strong enough to survive.

I’ve been a fan of Larissa Ione’s Demonica series ever since i picked it up and there was only three books out. I just love this world that she built. Then she expanded on it with the addition of the Four Horsemen of the Apocalypse, who I adored even more. Then at the end, she had the fallen angels that she included in the mix.

When the series ended, she started with these 1,001 Dark Nights novellas. I really enjoyed the first two novellas that were about Hades and Azagoth (the Grim Reaper). They were characters that had been a part of the series for a while (I don’t remember exactly when they showed up, but it was probably the beginning of the Lords of Deliverance series). The next two in this series, Z and Razr, I didn’t like as much.

I think part of my issues with these two most recent books is that they are not characters that I already loved from the full length books. The characters in this book were new and I just didn’t connect with them as I did with Hades, Azagoth and their mates, even as much as I did with Z and his other half.

Jedda is a gem elf. Something we haven’t seen in this world. She gets power from the gems, but she must also have them to exist. I think I could’ve like her a lot more if I knew more about her. Being a completely new species that lives in a different realm, I think we needed more time to learn about her.

Razr is a character I liked more. I think it is because I understand him better. He is an angel, but he’s banished from Heaven and his wings are bound. He and his teammates made a huge mistake and now he is punished. He works with Azagoth and trains Azagoth’s children (a type of angel called Memitim). He is also forced to be beaten on an irregular basis. He has a tattoo that will flash when it is time. The more severe the beating, the longer he will get before the next beating.

While I wasn’t in love with this book, I still enjoy the world that Ms. Ione has created. With the addition of this new species, I wonder if we will see a new series with the gem elves. I would love to learn more about them. I will be interested to see what the next thing Ms. Ione has in store for us.