Posted May 28, 2017 by Melanie in Melanie, Paranormal Romance, Reviews / 21 Comments 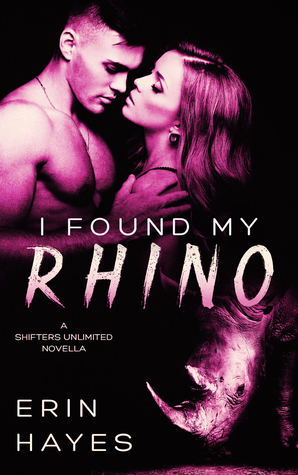 Last night was great. Mind-blowing, even.

One minute, I’m at a bar trying to locate Ernest Shepherd, a rhino shifter. The next, I’m going home with a gorgeous bartender named Ryan for a night that I’ll never forget.

What I didn’t realize is that Ryan is Ernest’s grandson. He’s a rhino shifter, too. And he may just be the rhino I’m looking for to fill a vacancy at the zoo.

When we started our professional relationship with unsanctioned benefits (my boss would kill me if she knew), I didn’t think I’d fall for Ryan. Or that it could all come crashing down in a life or death situation that will change us forever.

I found this book thanks to Lola Reviews. I read her review and thought the story was cute. I went to Amazon and saw the price was only $0.99 and decided to buy it. This is a short story. I read it in the time I sat in the airport and on the flight home from RT17 (so about 2ish hours).

The book opens with an author’s note about why she decided to start this story. It all goes back to poor Harambe. She specifically states that this is not a story about if zoos should exist, but more about creating a happy ever after in that kind of situation. As a volunteer at my local zoo, I’m a fan of zoos. I do wish there wasn’t a need for them, but that is just not the case. Zoos do so much great conservation work for animals in the wild.

The heroine, Leslie, works for a group called Shifters Unlimited. She is tasked to find a white rhino shifter for a zoo who has had a hard time finding a normal white rhino for their exhibit. She knows that Ernest Shepard is a white rhino shifter and that he owns a bar called The Drinking Horn. However, she finds Ryan instead. Ryan is Ernest’s grand son, who moved home to help his grandfather when he got ill.

So Ryan is struggling to take care of his grandfather and keep the bar afloat. The cost of cancer treatments is more than what the bar is bringing in. He doesn’t want to sell the bar, but he doesn’t see what else he can do. That is until Leslie comes into his bar and drinks too much. So he offers to escort her home safely. He ends up spending the night.

I found this to be a very cute story. However, I did have a few issues. First, I’m not sure how I feel about that first time in the sack. Ryan was concerned at how intoxicated Leslie was to see her home safely, but then has sex with her. If she was too drunk to see herself home, I question if she was sober enough to give consent to sex, even if she was the one who pushed for sex.

The second issue is some things about the zoo itself. Leslie is looking for a white rhino for a rhino exhibit. However, Ryan goes into an exhibit with other kinds of rhinos. This would never happen in a zoo. I’ve been to many zoos and have never seen black and white rhinos together. It just wouldn’t happen in this day and age. These animals don’t hang out together in the wild, so they wouldn’t be together in a zoo. White rhinos are more herd animals and black rhinos are more solitary.

Overall, it is a cute story. It is a quick read. If you’re like me and love shifter books, especially when they are the more unusual shifters (not wolves, cats or bears), then this is something you might want to try. I do feel that despite what the author said, she did come at this story with a bit of a bias about zoos, but I was able to put that aside. I thought the characters were cute. I am interested in trying another story by this author.

21 responses to “Review: I Found My Rhino by Erin Hayes (@mlsimmons)”