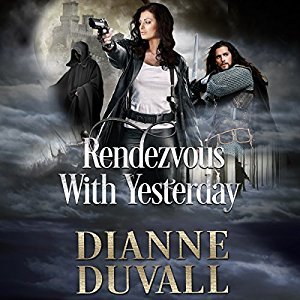 Modern-day bounty hunter Bethany Bennett helps her brother track two fugitives to a forest outside of Houston, Texas. But what should have been a routine apprehension of two bail skippers spirals out of control and ends in violence. After Beth and her brother are both seriously injured, a mysterious figure suddenly looms over her. And, when the smoke clears, Beth finds herself not only in another place, but in another time.

As Lord Robert, Earl of Fosterly, attempts to identify and track down the nameless enemy who has been plaguing his lands and people with violence, the most peculiar woman stumbles into his path. Small, vulnerable, yet possessed of a bold, fiery spirit and wicked sense of humor, she persists in dubbing Robert and his men members of something called a medieval reenactment group - until she sees his castle and labels herself mad. It seems bounty hunter Bethany Bennett has come to him from the future, bringing with her laughter and chaos, swiftly winning the hearts of his people and inspiring within him a love he thought he would never experience again. But when Robert discovers a way for her to return to her time, will the love they share be enough to keep them together?

Dianne Duvall’s Immortal Guardians series is on my list of favorite paranormal romance/urban fantasy series. When I eventually decided to read her historical paranormal romances, I pretty much kicked myself for not reading them as soon as they came out. They are every bit as good as her Immortal Guardians, and that is saying something! I read the first one, A Sorceress of his Own, and decided to listen to this one instead. Good decision!

Bethanny Bennett is what the author terms as a modern day bounty hunter, along with her beloved brother. They end up in a shoot out with a couple of bail jumpers that have holed up in the middle of nowhere, Texas. After seeing her brother get shot, she is also shot, more than once. She should be dead, but after seeing a strange man lean over her right before she passes out, she wakes up in a different time. An ancient time of castles and moats and sword fights. Not only does she wake up, her wounds have all been healed although she still looks like she’s been in a blood bath. She is found by Sir Robert, Earl of Fosterly, and his men. She decides that they must be a reenactment group of some sort. But then why is the weather completely different, and where did her brother go, along with the bail jumpers? When she finally realizes that she is back in time, she pretty much has a private meltdown. I think that is what most people would do and I don’t like time travel romances where the main character is okay with it. What she doesn’t do is admit to the Earl when and where she is from. At least not right away.

Sir Robert was first introduced in the previous story and was a favorite character of mine from that book. He’s honorable as the day is long, treats his people well, and is really handsome. Beth comes into his world and pretty much turns it upside down. She’s a beauty, but would rather learn to sword fight than stitch a quilt. Or whatever women sewed back then. It’s not long before she has Robert and all his people eating out of her hand. She also has men hunting the countryside for her brother. Another character that shows up is Seth from the Immortal Guardians series. He was briefly in the previous book, but has a much bigger, but still peripheral role in this installment.

There is of course a lot more going on than what I have mentioned. This is both a good romance between characters that I loved, and the story of Beth learning to live without her modern day conveniences, as well as her brother. There is also plenty of intrigue and real sword fighting to fit the time period. Things back then were not always tranquil and fighting was pretty common between different factions.

Narration? I thoroughly enjoyed listening to Kirsten Potter narrate. She kept me entertained and never pulled me out of the story due to a discordant accent or voice. I would be more than happy to listen to other books that she has narrated and highly recommend her.

This was well written, as is everything Ms. Duvall writes and I enjoyed the whole book, even a bit more than the first book. And the first book was good! Maybe listening made it better for me, although I am not sure. I highly recommend this book to adult readers of paranormal romance or historical romance. It’s time travel, but it also has some special abilities that are involved as well. Fantastic read!