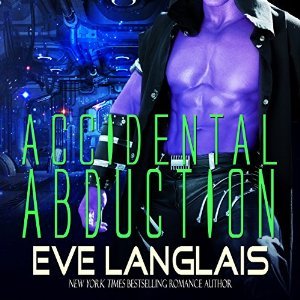 Abducted by a space pirate, she fights the temptation to let him plunder her goods.

A boyfriend's attempted murder leaves Megan floundering in the ocean. Sinking without hope, the bright light she sees in the night sky isn't her doorway to heaven, but rather the beginning of her accidental abduction by a space pirate. While thankful of his rescue, Megan stays true to form and just can't keep her mouth shut, even when he keeps threatening to kill her--or auction her off to the highest bidder. Even odder, despite her decision to not get involved with her wickedly hot captor, she can't help craving his touch.

Tren retired from his job as a mercenary so he could enjoy life, but he never counted on the boredom of normalcy. The acquisition of rare items has somewhat filled the void, but his accidental abduction of an outspoken earthling, who doesn't know when to shut up, turns his life upside. Her fiery spirit draws him while at the same time drives him insane. Struggling with his urges, he must decide-- throttle her barbarian neck or ravish her delectably lush body?

As anyone who reads my reviews either here or over at Hot Listens, you know that I’m a huge fan of Eve Langlais. I’ve read or listened to most of her works, but she writes really fast and I’m way behind on her stuff. It is very hard to keep pace with her. Anyway, I have yet to try her Alien Abduction series. Seeing that it was on audio now, I quickly grabbed it up.

So, this book is very fun and pretty light-hearted. This one is very sexy and will make you laugh (if there is anything I will guarantee about a Eve Langlais book, it will make you laugh). Some of the stories have a little more of a serious edge, a more suspenseful part to the story. I didn’t notice as much of that with this book as many of the more recently released stories.

Megan is find herself abandoned out in the middle of the ocean. Her boyfriend decided to just get rid of her instead of dumping her. Just as she thinks she is going to drown, she’s picked up with a bunch of fish and deposited in a space ship.

So Tren, is a retired merc and now a space pirate. He is also purple and extremely sexy. Now he is stranded with this human that he wants nothing to do with. He decides he’s going to sell her at the first chance that he can. That is until he decides that he must keep her.

This is a pretty short story. There isn’t a huge amount of depth to it, but it is full of romance. Both Megan and Tren fight the attraction between them, which brings about some really great banter. I would’ve loved to have seem a little more story outside of the quick romance, but that didn’t prevent me from enjoying this really fun story. It has me very excited to see more books about these purple heroes. So in short, not my favorite Eve Langlais book, but I had a lot of fun with it and can’t wait to get further into this series.

“A grin spread across her face. He’d not only come for her, he loved her enough to start a galactic war. How cool was that? Nothing says I love you like bloodshed and violence.”

Narration
I was not familiar with either of these narrators before starting this story. I enjoyed both of them. I didn’t have any issues with men or women’s voices, though there wasn’t anything very complex and not a large number of characters to voice. I did enjoy the voices they had. Their pacing was great and they did a wonderful with the banter between these two. I hope that these two stay on for the entire series.