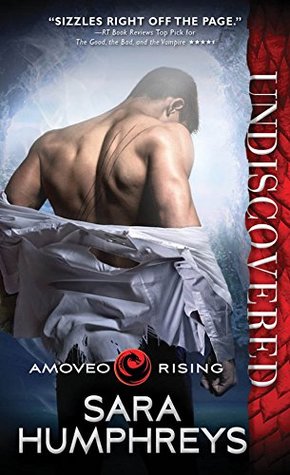 He's the man of her dreams
A long time ago, Zander Lorens was cursed to walk the earth stripped of his Dragon Clan powers. Every night, trapped in a recurring nightmare, Zander relives his darkest moment. He can hardly believe it when the dream changes and a beautiful young woman appears. Zander believes she's the key to ending his torment. Finding her in the real world is one thing, but how will he convince her of who-and what-she really is?

She's the end to his nightmare
Rena McHale uses her unique sensitivity as a private investigator, touting herself as a "human divining rod" and finder of the lost. By day she struggles with sensory overload, and by night her sleep is haunted by a fiery dragon shifter. Nothing in her life makes sense, until the man from her dreams shows up at her door with a proposition...

The Amoveo Legend series by this author was an interesting and actually fun series. I enjoyed it and only just realized that this book is book one of a spin-off from that series. Not sure why exactly since it features the same world and a lot of the characters from the first series are featured in this book as well. That being said, it was a bit different as it introduced a whole new clan of shifters to the Amoveo world-Dragons.

Rena is a private investigator in Las Vegas. She is very good at her job because she has the power of touching objects to locate people. Since she is an orphan, she has no idea why she has this gift. She begins having very vivid dreams of two dragons fighting a horrible fight that ends with her death every night. Zander is a dragon immortal that has been stuck in his human form for the past five hundred years, after being cursed by a witch. The same curse on his identical twin brother has kept him in hibernation as a dragon for those same centuries. The curse deadline is almost up, so he has to find a way to find his brother’s true mate in order to get him out of hibernation or they both will be this way forever. After “meeting” Rena in the dream realm, he now can find her. In this world building, true mates meet in the dream realm first, before finding each other. Of course there are major problems with Zander’s intention of handing her over to his brother.

Rena is feisty, stubborn, independent, and not about to let some man, no matter how hot, tell her what to do. Zander has a huge chip on his shoulder against the Amoveo, but also is attracted to Rena. I ended up enjoying Rena as a character much more than Zander, although he did have his moments. He spends a lot of the read denying his attraction to Rena because he wants his brother to have her and that got a bit annoying at times. I mean, I get it, he feels he has to do it to be free of the curse. He just went too far expecting her to just fall at his brothers feet when she clearly has feelings for him and doesn’t even know his brother. I also really enjoyed catching up with some of the characters from previous Amoveo books-always a good thing in any series book.

The book evolved into a road trip story which can be hit or miss for me. I did actually enjoy the trip part of the book. Of course it’s not all smooth sailing(and no they aren’t on a boat), bad things happen, and Rena did start coming into more of her Amoveo powers(yes, she’s a hybrid)which I liked. My problem came with a plot hole that bothered me towards the end of the book.View Spoiler »It had to do with dragon shifters living in Oklahoma five hundred years ago. Pretty sure the shifters would have to have been Indians back then, but obviously weren’t? I was okay with Zed being in Montana because the witch had put him there, but the Oklahoma thing immediately threw me. « Hide Spoiler

I’ve always enjoyed this authors books, both the Amoveo and her Dead in the City series. Humphreys is a good storyteller and always writes good world building and romance. This one just fell a bit short, I thought. The ending wrapped up a little too easily for me and combined with having a problem at times with Zander’s actions, and the plot hole, I felt I had to take half a star off of the four stars I would have given. That being said, I am looking forward to the next one in this series, and I think I know who it’s going to be about!

Recommended to adult paranormal romance readers. A copy of this book was given to me by Net Galley in return for a fair and honest review.