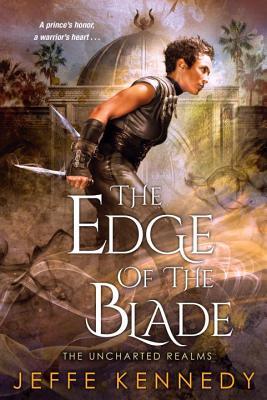 "The Twelve Kingdoms rest uneasy under their new High Queen, reeling from civil war and unchecked magics. Few remember that other powers once tested their borders until a troop of foreign warriors emerges with a challenge . . ."

Jepp has been the heart of the queen s elite guard, her Hawks, since long before war split her homeland. But the ease and grace that come to her naturally in fighting leathers disappears when battles turn to politics. When a scouting party arrives from far-away Dasnaria, bearing veiled threats and subtle bluffs, Jepp is happy to let her queen puzzle them out while she samples the pleasures of their prince s bed.

But the cultural norms allow that a Dasnarian woman may be wife or bed-slave, never her own leader and Jepp's light use of Prince Kral has sparked a diplomatic crisis. Banished from court, she soon becomes the only envoy to Kral s strange and dangerous country, with little to rely on but her wits, her knives and the smolder of anger and attraction that burns between her and him . . .

In this tale, we follow Jepp, Queen Ursula’s best scout. Their story started in The Pages of the Mind, where the queen sent them on a diplomatic mission to Dasnaria. In the first book of this spinoff series, they made a stop in which Dafne, the original ambassador stayed behind in Nahanau. That put Jepp in the position of ambassador, a role she was never meant to play. Jepp doesn’t have a diplomatic bone in her body. She is a spy, a scout and sometimes, even an assassin. This story overlaps chronologically with Dafne’s story. We know a little bit more than Jepp does about what is going on with Dafne. This does fuel some anger in Jepp. She doesn’t know what is going on with Dafne, and since she was supposed to be Dafne’s bodyguard, you can see why she is concerned. Not to mention, she knows this is a role she is not good at.

There is also a huge difference in culture between Jepp and Kral. In Dasnaria, women are meek, they are not noticed by the men and are seen as lesser individuals. You can imagine how that would go over with a woman who has been own her own for most of her life. She has come from a world where women can rule and can be seen as warriors. She also lives in a world where women have sex with who they want. After one night of sex, Kral now sees Jepp has his. He is upset when she sees it only as a one night stand. This is a bone between them for a while.

Once they actually reach Dasnaria, things are real eye opening for Jepp. The world for women there is much worse than she expected I think. She doesn’t do well with the king of this realm, who is seen as a divine entity to the people of Dasnaria.

The relationship between Kral and Jepp is not an easy one. They come from two completely different worlds and have a hard time seeing things from the other side of things. It is difficult for both sides to budge in their beliefs, but there is also a strong pull between them.

The ending of this story really surprised me. I won’t go into details, but I will say that I’ve very interested in seeing what happens in the next story. It’s not a cliffhanger, but there is definitely more of this story to tell. I think it will also be very interesting to see the next couple, which is revealed at the end of this story.

The part I loved most about this story was learning more about Jepp. We get a fairly detailed backstory about Jepp. It is told in several different ways including Jepp’s memories and while she is talking to Kral. Jepp is a very interesting character. She has been strong her entire life. I’ve liked her since the first time I met her in the Twelve Kingdoms series. I was so glad to learn more about her.

If you haven’t tried this series, it is one that I will highly recommend. I would also recommend that you start with at least the first book in The Uncharted Realms series, The Pages of the Mind. I would also highly recommend that you try The Twelve Kingdoms series. I don’t think I would it is a requirement for this series, but it does give you more backstory about this world. Not to mention, that it is a great series, too.

Another area of skill I sadly lacked, comforting a weeping woman. I’d never been the hold her hand while she cried kind of friend–I was more there for the phase of “let me help dispose of the body.”

25 responses to “Review: The Edge of the Blade by Jeffe Kennedy (@mlsimmons, @jeffekennedy, @KensingtonBooks)”