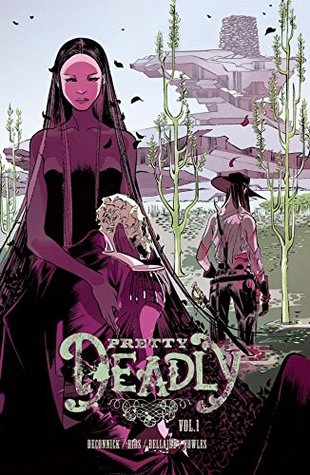 KELLY SUE DeCONNICK (Avengers Assemble, Captain Marvel) and EMMA RÍOS (Dr. Strange, Osborn) present the collected opening arc of their surprise-hit series that marries the magical realism of Sandman with the western brutality of Preacher. Death's daughter rides the wind on a horse made of smoke and her face bears the skull marks of her father. Her origin story is a tale of retribution as beautifully lush as it is unflinchingly savage.

There’s a special kind of chaos that went into the creation of PRETTY DEADLY. The installments begin from the POV of a bunny and a butterfly, told fable-style, but as the main characters are human, there’s a significance to our animal narrators that isn’t immediately understood. I say “understood” b/c there’s a lot that is never explained, just implied. Combine that with the maelstrom of images you’re bombarded with as the violence escalates, and . . . like I said, chaos.

That’s not to say I didn’t like this collection of the first five PRETTY DEADLY episodes, I absolutely did. I maybe even loved it.

The story woven through each installment had the feel of a folk tale, but it was one I’d never heard before: a man wed a beautiful woman, and overcome with fear of losing her to another, he built a tower to keep in. She swore she’d die if he locked her away, and that’s what she did . . . But not before Death fell in love with her too. After that things get interesting. Basically, it’s a new fairy tale set in Wild West with gorgeous artwork, AND it’s clever to boot. What’s not to like? Highly recommended.