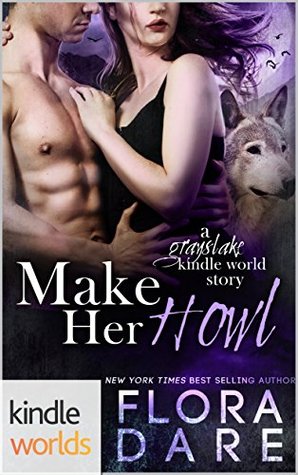 When you’ve loved and lost a fated mate, can you dare to hope for a second chance?

After her human mate was tragically killed years ago, wolf shifter Magda fled Grayslake and all it meant. She only returned to protect her adopted daughter and she’s determined to stay out of local shifter politics.

Marc has spent years protecting Grayslake’s shifters after a tragedy of his own. When Magda walks into his life, his inner wolf awakens. He never thought it possible, but she’s living proof that miracles happen. She’s his mate.

Now he just has to convince her that everyone gets a second chance at love.

I got this book for review from the author of the original series, Celia Kyle. She wrote the Grayslake series which follows mostly bears, but also wolves, hyenas and even a mole shifter. I really loved the original series as it tackles some pretty tough topics such a abuse, racism and more in a story that is pretty funny and full of great characters. I was a bit apprehensive about other authors writing short stories based in the same world and even the same characters, especially when I didn’t know any of these authors. However, I found that really enjoyed this book.

Flora Dare takes us back to Grayslake, Georgia with Magda who found her mate, who was human, but he was killed years ago. She has insisted on staying out of shifter politics since then, but has come back to town when her daughter decides to wed someone in the bear pack. There Magda meets Mark, another wolf who is also the pack doctor. He is also a shifter that had found his mate, but lost her all too soon. Even though Magda is attracted to Marc, she finds herself putting space between them. Marc is in the pack and she doesn’t want any part of it. It seems that Marc isn’t the only one who wants to see them come together as several people in town, including one pack member become the voice of reason, work to bring these two together.

I was very surprised by how much I enjoyed this story. It has several of the characters that I’ve come to love in Grayslake. I love how Ms Dare was able to keep the personalities of the original characters true to the main series. She did a great job talking difficult subjects while still keeping humor in the story. This is a story that can be read as a standalone without any issue. I think it is a really great read for fans of the original Grayslake series. It has me excited to try some of the other books, by even more new-to-me authors for this series.

A sharp sting across her knuckles brought her back to the here and now. “Don’t get maudlin so early in the morning. It’s bad for you.” Grace slid a plate piled high with pancakes, bacon and eggs in front of Magda. “If you spend too much time regretting the past, you miss out on living in the present.”

“Don’t let your past destroy your future. You can thank my fifth therapist for that one. At a certain point, you have to live for you.”