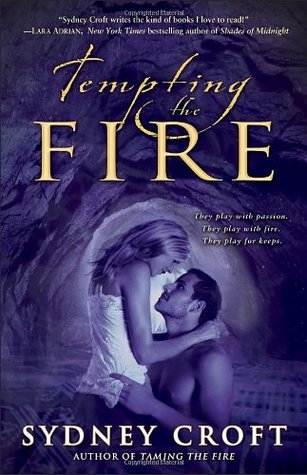 Deep in the Brazilian rain forest, a team of Navy SEALs has been nearly wiped out by something sinister and superhuman, sending shock waves through the Agency for Covert Rare Operatives (ACRO). Now ACRO agents Sela Kahne and Marlena West head to the world’s most unforgiving jungle to find and kill a mythical monstrosity with a taste for human blood. But to succeed in their mission, they will need the help of two men, each hiding his own dark secret.

Sela is an expert on cryptozoology with a sideline skill that could prove invaluable: When she makes love to a man, she engulfs his innermost thoughts. Teamed with Marlena, Sela makes contact with the lone SEAL survivor, Chance McCormack. Meanwhile, Logan Mills, the man who rescued Chance, leads his private company on a hunt that has nothing to do with saving lives. Soon, Sela will put her supernatural charms to work on Logan, determined to extract information about the creature they are seeking. But in this sweat-drenched realm of danger and deception, Logan is more than just a passive target. He has the power to lead a highly trained seducer into a jungle without any rules, without any limits—and with no end to the heat.

If you’re not familiar with ACRO series, ACRO is the Agency for Covert Rare Operatives. They are a group of people with superhuman abilities. Many of them are former military and the ones that aren’t have a military like training at ACRO. I’ve always thought of them similar to the X-Men and they are even referred to that in this book. ACRO are the good guys. ITOR are the bad guys, also with superhuman abilities. They often are both trying to recruit the same people, though the have different ways they go about recruiting. ITOR isn’t above abducting.

In this book, we have yet another player, GWC, Global Weapon’s Corporation. They are a weapons manufacturer. The owner was never very careful about who he sold his weapons to, until his son in injured and made into a cyborg of sorts (although that term is never used in the book, that is basically what he is). The son, now cyborg, Logan, is former military and is now very involved in the company. He does not like some of the things his father has been doing.

The book starts off with a SEAL team in the jungles of Costa Rica and they are attacked by some sort of monster. ACRO sends down their cryptozoologist and an “assistant” to investigate. They think it has something to do with ITOR. Come to find out, GWC has been working with ITOR and lost a potential weapon in a chupacabra. Yep, you read that right. GWC had found a real chupacabra and they were trying to weaponize it. Logan just wants to recapture it before it does more damage.

Chase is the lone survivor of his SEAL team, but he is not the same. That creature had attacked him. The only reason he survived was because he has always healed way faster than most people. He is also being held prisoner by these GWC guys. Though with his new strength, he is a prisoner only because he is willing. He could break his bonds whenever he wanted.

Sela is the cryptozoologist who ACRO sent to Costa Rica. She actually is a cryptozoologist. She has also been looking for a chupacabra for years. She came to ACRO after she slept with another agent and learned about it. She is a psychic who can read a person when they orgasim. She started off in ACRO as a Seducer until she was beaten by a target, not to mention that the people she was sent after were not good people and the psychic impressions had gotten to her. That was when she asked to move to the cryptozoology department.

Marlena is a character that has been around since the first book. She started off as Dev, the leader of ACRO, assistant and part-time lover. That is until Dev found his true partner in Gabe. Marlena doesn’t have any superhuman powers, but she is cursed. Her sister cursed her never to find love. After she has sex with someone, she falls deeply (like as in stalker crazy) in love with that person, but that person is instantly disgusted by her. She is usually thrown out right after sex with the most angry look on the guy’s face. Dev was the only person to ever sleep with her and still be nice to her, though he didn’t love her, though she was deeply in love with him because of the curse.

So, there is a lot that goes on in this story. Sela and Logan are a couple that comes together. Also Marlena and Chase become a couple. There is also a lot going on with Dev and Gabe have some issues that they must work through. Gabe being new to ACRO and trying to push the rules since he is sleeping with the main guy. There are also a lot of issues between Creed & Annika, who are from a couple that have been feature since the beginning. They have a very interesting relationship that gives new meaning to complicated. We are also introduced to a new bad guy at ITOR, Phoebe/Melanie. They are one in the same person with a split personality. Melanie seems pretty normal, but Phoebe is beyond nuts. We also learn a pretty interesting secret about the two of them (are they two or one, I’m not sure how that works). I will leave the Phoebe/Melanie and tell you that you must read the book if you want to learn more.

I know that this sounds like a lot is going on, and there is. But, it isn’t so much that it is overwhelming. It kept me very interested in the story (which has been hard for me the last few months). This is a really fun series that is completely different from any other PNR series out there. If you haven’t tried it, I highly recommend it. I should also point out that Sydney Croft is an author team of Larissa Ione (an author that I love) and Stephanie Tyler (an author that I still need to try outside of this series). So if you’ve tried either of these two authors, know that you will like these books too.