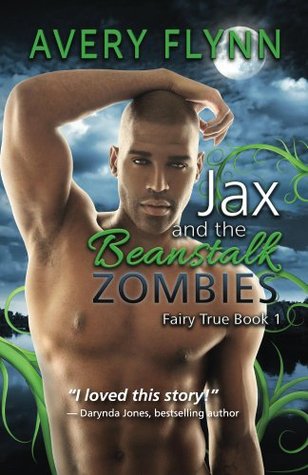 "Avery Flynn leads us into a shimmering magical world with a sexy twist that is pure, unadulterated fun. I loved this story!" - Darynda Jones, NY Times Bestselling Author

The treasure hunter… Veronica Kwon is determined to be the only person in control of her destiny. After surviving a broken engagement and turning her back on her wealthy manipulative father, she started a treasure hunting company and is ready for the adventure of a lifetime.

The ex-fiance… Jax Taylor is a Southern charmer with enough sex appeal to melt the polar ice caps. He disappeared three months before their wedding and swore he’d never cross paths with Veronica again.

The magic beanstalk… Brought together again by their dying mentor, who has found three enchanted beans, Veronica and Jax agree to an uneasy partnership. Together they’ll climb a magic beanstalk to the cloud kingdom, but will their destiny be the riches they so desire, the passion they thought dead…or will the undead get them first?

I met Avery Flynn at RAGT15. She is a very sweet person and super funny. I hadn’t read anything by her, but I had been planning on it since I met her. Then I saw the reviews for this series on The Geeky Book Blogger page. Since Felicia loved these books so much and she I are very similar on our reading. I thought was a great place to start.

This story is very short and sweet at only 81 pages. But it was very fun read. You have Jax and Veronica who were engaged to be married, but Jax called off the wedding three months before the big day. They were both called in to help their old treasure hunting mentor, Antoine, to go on this treasure hunt up the beanstalk.

Now, she goes into the fact that the giants that we’ve all heard about in the stories were wiped out by a spell that they tried to use to make themselves smaller, more average sized. They have no idea if anything is at that top of the beanstalk, but Antoine wants to grab the goose that lays the golden eggs and the golden harp.

Needless to say, they get up into the clouds. They learn that the giants turn into zombies. The thing I found interesting about these zombies, they giggle instead of moan. I think it would be way creepier to listen to a horde of giggling zombies than a horde of moaning zombies.

I won’t go into any details about what else happens. Let me just say, I didn’t expect to see that ending.

This story isn’t a real deep story, but that’s okay. It was fun. It has a second chance romance. Yes, we do learn why Jax called off the wedding. There are several things from stories besides just the beanstalk. There is also magic carpet sex and pixie dust among other things. I’ve already bought the next book in this short series. Lots of fun.

30 responses to “Review: Jax and the Beanstalk Zombies by Avery Flynn (@mlsimmons, @AveryFlynn)”