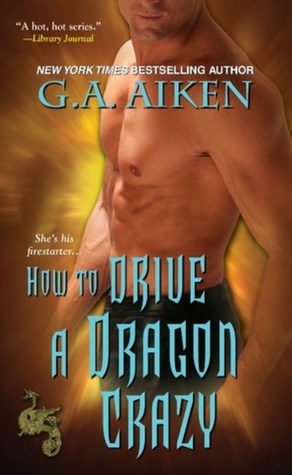 Some things never go away, like vile enemies, bad ale, and annoying kin. But I thought I was finished with the one dragon I'd have done anything for: Éibhear the Blue, a big, gorgeous, blue-haired beast who thinks the world belongs to him. The world and, apparently, me.

So if Éibhear wants to play the caring hero and travel into the most forsaken of Gods forsaken lands to protect the one woman who doesn't need it--namely me--I'll let him. Because while I'm trying to fulfill a ridiculous quest for a pushy god, I'm going to draw this overconfident warlord much too close, rekindle his fires, and enjoy every minute of his delicious defeat..

I love being back in the world of the G.A. Aiken’s Dragon Kin. Not only that, to have Éibhear the Blue’s story on top it. Éibhear has been one of the funnest characters in this series since the beginning. As the youngest of the royals, he gets picked on a lot, but has always taken it in stride, that is until one of close friends dies in battle in the previous book, The Dragon Who Loved Me. Everything changed for Éibhear on that day. He completely blamed himself. He is no longer the fun-loving dragon he was. Now, he’s leading a group of Mì-runach. They are a group of warriors who are fears, even among the other dragons and warriors. They are sent in to kill everything. They are known for not being able to follow orders.

Izzy is a warrior who has not had an easy life. She was taken from her mother not long after her birth. Then she was raised followed by three armed men as they moved around the land. When she was finally reunited with her mother at sixteen, she wasn’t a typical daughter. Then she spent time as Annwyl the Bloody’s squire before becoming a captain in her army. Once she was reunited with her mother and her adopted father, she was protected, not only by her parents, but by all her uncles. In particular one blue uncle who Izzy had a crush on since she first met with him. Éibhear, though, had a hard time with the whole niece thing, even though he truly felt the same way.

There is a lot that goes on outside of the romance between these two. Rhi, Izzy’s little sister, and Annwyl’s twins, Talan and Talwyn all make very large decisions. I’m really interested to see where their stories go. Aiken doesn’t have a problem with putting several years in the timeline between each book. More than 20 years have past since the series started. We also have new characters in this already very large cast of characters. We meet Izzy’s father’s family, who were great. I don’t know if we will see more of them in the future or not. There is also the addition of Dagmar’s nephew, Frederick. I think he has a story to tell.

Once again, this story is full of humor. It was hard to choose what quotes to pick. I decided to pick how both Izzy and Éibhear introduced themselves, because I just thought they were priceless with how they really like to use titles and such. Next, I had to show about how hard it was for Éibhear with the whole “uncle” thing. Something Izzy never had an issue with. For the most part, the family didn’t have any issue with it. I could’ve included 10+ more quotes, but I felt I needed to restrain myself.

“I am Iseabail the Dangerous,” she called up to the rude bastard. “Daughter of Talaith and Briec the Mighty. General of Annwyl the Bloody’s Eighth, Fourteenth and Twenty-sixth legions. She threw down the horn-handled dagger her father had had made for her many years ago. “And the killer of the dragon whose horn that used to be, Olgeir the Wasteral.” She crossed her arms over her chest. “Who are you?”

“I’m Éibhear the Contemptible. Youngest born son in the House of Gwalchmai fab Gwyar, fifth in line to the throne of the White Dragon Queen, Scourge of the Northland territories, Most Reviles Enemy Dragon of the Ice Lands, Honored Member of the Mì-runach Yearly Pit Fights three winters in a row.”

“And how does your dragon brother feel about Iseabail?”
“He adores her. Briec calls her his perfect, perfect daughter,”
Another of Zarah’s grandson’s folded his arms across his chest and asked, “And are you her perfect, perfect uncle?”
“Not by blood.”
“Did your brother adopt her?”
“Yes.”
“Then you’re her uncle.”
“Yes, but not by blood.”
“And that point matters?”
“Trust me,” Éibhear insisted. “It matters.”

32 responses to “Review: How to Drive a Dragon Crazy by G.A. Aiken (@mlsimmons)”