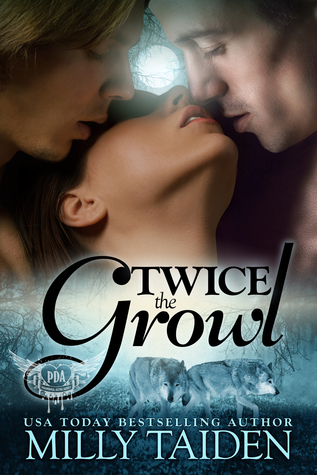 Talia Barca needs a date. Badly. She uses the services of the Paranormal Dating Agency hoping for a decent guy to take to a family wedding. A wedding her ex-husband has wormed his way into as a guest.

Connor and Theron want Tally to complete their Alpha triad. She's sexy, curvy and funny. But she's human. And they're not sure she'll go for a relationship with two men at the same time.

As if deciding to give two men a shot wasn’t difficult enough, Tally will also need to deal with a threat from the pack. She'll either prove she's strong enough to be an Alpha mate or find herself at the mercy of a vicious opponent.

I’ve been seeing reviews for Milly Taiden on Angel’s Guilty Pleasures for a while now. I’ve been wanting to try them, but never got around to trying anything. Angela offered to loan me her Kindle version of this book so I could try this author and I jumped at the chance.

This series is based on Gerri Wilder who runs the Paranormal Dating Agency. When you go to her to get set up, she pretty much asks you to trust her and let her do everything. Talia is looking for someone to take to a wedding. She’s had really bad luck with men and she just needs someone to be her date to this wedding so that her family will leave her alone. Her ex-husband will be there too.

Theron and Connor are alpha and omega of their pack. They were raised knowing that they would be. They were also raised knowing that they would need a third in their triad to lead their pack, a woman that would be perfect for both of them. They have spent their entire life sharing women, but haven’t found the woman that will be the perfect mate for them. They finally decide to go to Theron’s Aunt Gerri to see if she could help. Little did they know she was going to pair them up with a cute little human girl from down the hall.

This is cute and quick read. I liked Gerri. I wasn’t a huge fan of Tally. She was all about how she wasn’t good enough. Theron and Connor were a little too perfect for my taste. They had absolutely nothing wrong with them and they put Tally up on a pedestal so high, I would be scared of falling, myself. I really disliked Paul, the ex-husband, who caused quite the scene at the wedding shower. I liked Nita, Tally’s best friend, but at the same time, I thought she put a lot of pressure on Tally.

“Fine, but you really need to give those men the mate they desperately need.” Nita patter her hand. “They’ve been patient with you for almost two weeks. They need you to make a move already.” Nita stared deep in her eyes. “You are not a punk, prima. You’re a self-assured woman who knows what is good and what isn’t. Is this good for you? Do these men make you happy? Only you know the answer to that.”

While, I love what she’s saying, but two weeks. Really?? That is awfully fast to me with one man, more or less the fact that you are changing things by adding this whole new idea that she can have both men. That is a completely new lifestyle to her and it would take some getting used to and Tally has some very valid concerns about it.

Anyway, if you go into this story with just the quick, cute read in mind, it was fun. The men were very romantic. The sex was hot (if I do question the hygiene at times, ew). There isn’t a huge amount of depth to the story or characters, but it was cute. I’ll give the second book in the series a chance.

31 responses to “Review: Twice the Growl by Milly Taiden (@mlsimmons)”