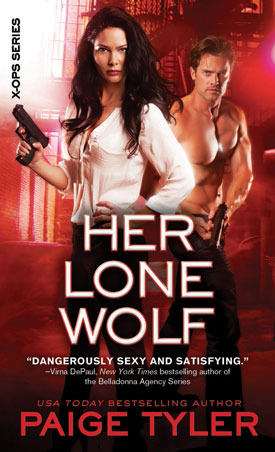 Leaving him was Impossible…

It took everything she had for FBI Special Agent Danica Beckett to walk away from the man she loved. But if she wants to save his life, she has to keep her distance. Now, with a killer on the loose and the stakes higher than ever before, the Department of Covert Ops is forcing these former lovers into an uneasy alliance…whether they like it or not.

Seeing her again is even worse

The last thing Clayne Buchanan wants is to be shackled to the woman who broke his heart. She gets under his skin in a way no one ever has and makes him want things he has no right to anymore. All he has to do is suffer through this case and he can be free of her for good. But when Clayne finds out why Danica left in the first place, everything he’s tried to bury comes roaring back—and there’s no way this wolf shifter is going to take no for an answer this time.

This is the second book in Paige Tyler’s X-Ops series. I have to admit, I think this one is even better than the first. I read the first X-Ops book last summer. Then I listened to the SWAT books on audio at the end of last year. Now, I’m going back to the X-Ops books. I’m glad to be back in the world of X-Ops world.

While the SWAT and X-Ops books are similar, they are also different. SWAT, is all werewolves. X-Ops has an array of different shifters. SWAT, mostly just the males are in the police. X-Ops both partners are part of the federal government unit (Department of Covert Affairs, called DCO) that is unknown to most of the public. X-Ops, is always a human partnered with a shifter. And if the shifter is about to be compromised, the human has to eliminate them. There are people who want to see the shifter program fail. They also don’t allow partners to have sexual/romantic relationships with other members of the unit.

The story starts off when FBI Special Agent Danica Beckett realizes that she and her team are dealing with something that is more than human on her most recent serial killer case. She makes a call to her former boss that she thought she would never speak to ever again, but she didn’t know who else to call. She hasn’t talked to anyone at DCO in the two years since she left. But she knew that the local police and the FBI would not be able to catch this killer on their own.

Clayne Buchanan is a wolf shifter, one that is always on the verge of going over the edge. He was brought into the DCO when he was caught surrounded by a bunch of mutilated dead bodies. He is one of the reasons why some of the people think that the shifter program should be shut down, or at least shifters like him. He is like a time bomb, always on edge and quick to agitate. He doesn’t have a partner since his partner and lover walked out on him and crushed him two years earlier, so he’s sent out to help with this shifter. He’s a great tracker and great dealing with shifters who’ve gone off the rails.

This is a story that is full of action, heat, romance, politics, police procedure and much more. If you like crime dramas filled with action and you like shifters, this series will bring those two aspects together into a great story with fun characters. While this story does stand alone, there are aspects of the first story that I think will add to this story. I don’t think you will be lost if you read this one first, but you will get more if you read Her Perfect Mate first. Plus, it is great story too, so you have nothing to lose there.