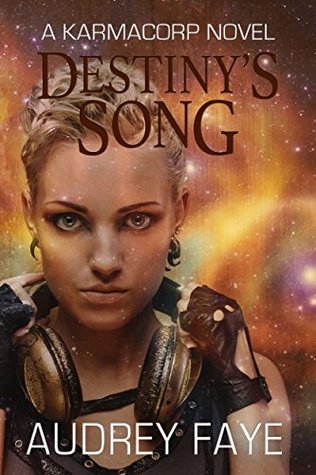 Lakisha Drinkwater is the best Singer in the quadrant. Which means the last thing she was expecting is her latest assignment…

The boss lady is sending her to an Inheritor-ruled backwater planet to babysit the heir apparent, for reasons that are about as clear as space mud. But the StarReaders have spoken, and Fixers do what they’re told – especially if they work for Yesenia Mayes.

So Kish is headed for the boondocks, prepared to be a dutiful cog. But Bromelain III isn’t going to make that easy – and neither is the heir apparent.

Meet the Fixers of KarmaCorp. Their job is to work on behalf of greater good in the galaxy. Their challenge is to figure out what that means.

Destiny’s Song is the first book in the Fixers quartet, an offbeat science fiction series in which nothing explodes, nobody is at war, and life gets pretty interesting anyhow.


I am a huge fan of Debora Geary’s witches series, and I read and loved every single one of them. When she quit writing the series, I was really sad and never even thought about her writing under another name. Imagine my surprise when I found this series by her recently. I was really excited and needless to say, this book found it’s way up to the top of my tbr pile. It’s completely different from her witch books, but her wonderful writing is still very evident.

Kish is what’s known as a Fixer, otherwise known as a person with a rare talent. Kish’s talent is singing, but not singing like we know it. When she sings, she can feel the moods, how people feel etc. She can also use her talent to “fix” situations. She was taken in at age ten by a company called Karmacorp. There she was trained to develop her talent and to learn how to fix problems. She lives at the corporation, but is sent on jobs to other planets within the quadrant that she lives in. She’s twenty five, and is very good at her work. When she is sent to an outpost colony, one that isn’t part of the federation yet, she doesn’t understand why it’s that big of a thing. She’s used to breaking up rebellions, and that type of thing. Important work. On this colony she is expected to nudge a couple into falling in love for the good of the colony. She wonders why a Fixer even needs to be involved, why would they waste her talent on that kind of thing? She thinks it will be easy, but she also feels it’s unethical to the young couple. Little does she know that it will be her hardest job yet.

Kish was an interesting character with a back story of being the only survivor (as a baby) of a vehicle that crash landed on a asteroid, near a mining operation. She is taken in there and would have stayed there, if an outsider hadn’t heard her singing. She’s good at what she does and has made a far better life for herself than had she stayed at the mining camp. She has a roommate and best friend named, Tee, and good friends, Iggy and Raven. Devan Lovatt and Janelle Brooker are the two young people that she is supposed to sing towards a wedding. When she meets the two, everything changes for Kish, especially when it comes to Devan.

This author is known for her cozy witch stories and characters that you fall in love with. There’s usually a message to be learned or a couple that falls in love. Witches are trained and little ones nurtured. The stories and the characters are all intertwined and wonderfully written. In this series, there are messages as well, and Fixer’s to be trained and nurtured. If you are looking for it, you will see how this book could fit right into her witch books-except there aren’t any witches. However, had I not known, I probably wouldn’t have compared the two. Because they are different, and written for a slightly edgier audience, in my opinion. Sex is talked about, but doesn’t happen in this book. Language is a bit more adult. It still falls in the wonderfully written category, however. I must admit that I was a bit confused with the the talent that the Fixer’s had, at least initially, although it didn’t take too long for me to understand.

I enjoyed the futuristic aspects, the characters and the romance, such as it was. And it was a romance of sorts. I would have liked a bit more about the romance, and I think I missed that part a lot. Normally all her books are 5 star reads for me, but due to my initial confusion over the talents, and the romance being a bit lacking, I rated it 4 stars-which still means it was an excellent read. I will definitely be reading the next one, sooner rather than later. Recommended to young adults aged 16+ to adults.