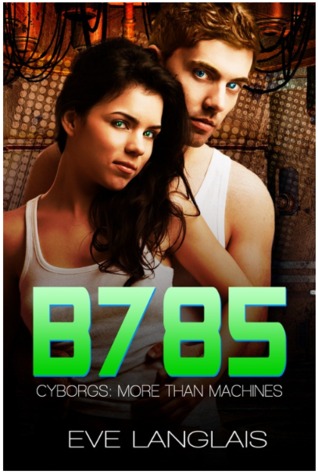 Einstein was probably the only cyborg in existence with no interest in the opposite sex, until he discovered B785. With her sensual nature and quirky sense of humor, she draws this cybernetic geek out of his scientific shell and teaches him the one thing he’s never understood – passion.

Tired of being a slave to the military, Bonnie went to sleep one day with the intention of never waking up, but she didn’t count on a cybernetic prince charming bringing her back to life. Coming to terms with her past isn’t easy, but harder still is the realization that even a bionic princess can fall in love.

However, all fairy tales have a villain, and despite the fact the military wrote them both off as a loss, they soon discover they’ll need to fight to have their happily ever after.

Ah, the cyborgs. I’ve really been enjoying this series. They are a group of former humans who the military turned into cyborgs, usually after some sort of life threatening injury. Most of the cyborgs have had their memories wiped and they don’t remember their lives as humans. They were meant to be slaves to the humans, but that is until they left some of the cyborgs so smart that they were able to override some of the controls. Then the cyborgs revolted. They now live on their own planet. They are at war with humans, but they really just want to be left alone to live their own lives.

Einstein was one of those super smart cyborgs. He was formerly known as IQ221. He is the only one left of his kind. The others of his kind didn’t survive the purge when the humans decided that the cyborgs had outlived their usefulness. He lives entirely off logic. He doesn’t understand the emotions that have arisen in some of his brethren. He longs for the ability to joke around and have conversations with them. He just didn’t seem to have it in him. Mostly, he didn’t understand their need for sex. It wasn’t a biological need and he just didn’t see the point of it. He had tried sex once with one of the sexbots that the others used, but just didn’t see the point of it.

B785 was a special model. She was made with the ability to turn off her pain, which made the military have hard time controlling her. The torture that they put the other cyborgs through didn’t work with her because she could survive the torture as if it were nothing. She even lost her eyes and had to have them replaced with machine eyes, which looked like emeralds. However, when the commander tells her that her sister is gone, B785, Bonnie, shuts down completely until she is doesn’t seem to function at all.

When Einstein finds Bonnie in stasis in a brothel, he is able to get the maintenance man to give her over since she didn’t seem to be working. Once he gets to her come back to life with a kiss, of all things, she proceeds to change everything he thought he knew about the world.

I loved watching Bonnie getting Einstein out his shell. He had such a hard time with it. Bonnie is such a strong character. The guys kept wanting to treat her like she was made of glass and she would have none of it. Part of that was because she was putting herself down as not a good person, but she also felt that one cyborg was not worth more than the group, which I thought was very admirable. She had never even been to the cyborg planet and met most of the other cyborgs, but she was already trying to protect the society that they had built.

“You’re right. I do car. Very much.”
“I don’t know why you sound so surprised.”
“Emotions are hormonal imbalances. I control my hormonal levels. Or did until I met you.”
She wrinkled her nose and laughed. “You know that wasn’t exactly the most romantic declaration.” “I didn’t realize my words were meant to be a romantic declaration.
I was just stating my current state of mind.”
“Let me clear it up for you. I think I’ve fallen in love with you, Einstein.”


“You know Aramus will blame me.”
“Me better not or I’ll have him singing show tunes,” Einstein growled.
She giggled. “That’s just mean.”
“For everyone who has to listen.”
The devilish grin on his face had her laughing. “Oh and to think I used to think you lacked a sense of humor.”
“I did until I met you. I might have woken you from your sleep, but you woke me to my humanity.”
If she could have shed tears, she would have; as it was, her throat tighten. “Now that was romantic.”
“It was?”
“Most definitely.” She kissed him.