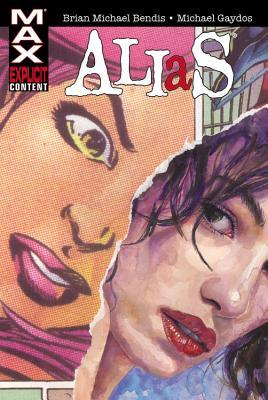 Once, Jessica Jones was a super hero. But not a very good one. Now a chain-smoking, self-destructive alcoholic, Jessica runs Alias Investigati ons - a one-woman private-investigative firm specializing in superhuman cases. But Jessica's life becomes expendable when she uncovers a famous hero's true identity. Thrust into the midst of a conspiracy that reaches the highest levels, has Jessica burned too many bridges to turn to old friends for help? Plus: Jessica investigates the disappearance of a teenage girl rumored to be a mutant in a prejudiced small town.

COLLECTING: ALIAS 1-28, WHAT IF JESSICA JONES HAD JOINED THE AVENGERS?

I’ve not read a large amount of comic books or graphic novels. The ones that I have read were based on novels that I had already read (Mercy Thompson, Anita Blake, Women of the Otherworld, etc.). I have been a huge fan of comic book TV shows and movies for as long as I can remember. I remember when Batman came out starring Michael Keaton and Jack Nicholson as the Joker. I loved it. I also watched a ton of the cartoons, Spiderman, Batman, Superman, X-men, He-man, Teenage Mutant Ninja Turtles and more. Today, I love the Marvel movies and TV shows. I recently watched the Netflix original Jessica Jones and decided that I wanted to learn more about her. She was a character that I knew nothing about before the show. So, I grabbed Alias, an enormous, textbook sized book.

So, if you’re not familiar with Jessica Jones, (first, why not??, second, you should go and check out her show now on Netflix), Jessica is a former superhero and a PI. She is quite the anti-hero. She’s a bit of a drunk. She has a habit of sleeping around. She helps her clients, but she has this “I don’t really care” attitude. But then when your career is chasing down cheating spouses only to have the one who hired you get upset when you actually have the proof, (I guess they were hoping you wouldn’t find anything at all), I would be cranky too.

This omnibus actually has a five different story arcs, all of which I enjoyed immensely. In this, Marvel has made Jessica into a real person, someone you can relate to. Because, let’s face it, none of us can relate to Thor, Captain America or Black Widow, as much as we would like to. Jessica is a person who has so real problem in her life. She has bad run-ins with the cops. Cops, who don’t like the Avengers and other superheros wearing capes and masks. She has her own run-in with a superhero who is more powerful than her (see the Jessica Jones TV show for this plot, which is only a small part of this omnibus). I will say that I’m really glad that Marvel Studios didn’t make David Tennant wear purple makeup, as he is known as The Purple Man in this book and is purple.

I did love that we got to see characters from several other parts of the Marvel universe. Captain America, Madame Web, J. Jonah Jameson, Dr. Jean Gray, Ant Man, Attorney Matt Murdock and Luke Cage all have large parts in this book. There is also a character called Carol Danvers, who I didn’t know at all from any of my previous experience with Marvel. You also see some other characters show up, but they don’t have large parts, Thor, Spiderman, Dr. Octopus, Hulk, the Lizard, among others. I will say that it is Jessica Jones who really does steal the show. I can’t recommend this book enough.

I will caution you. This is a Marvel Max comic. I didn’t know what that meant at first. It is Marvel’s version of the “R” rated comics. If you’ve watched the show, this will not surprise you in the slightest. I don’t think any of the reader of this review (people who have followed my reviews in the past) will have issues with anything in this book, but I did want to call out, just in case. This isn’t a comic for kids. There is a lot of sex, a lot of drinking a lot of the “F” bomb.

Click on the image to see a larger version.