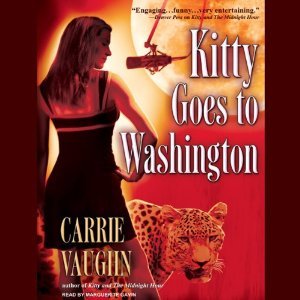 The country's only celebrity werewolf, late-night radio host Kitty Norville prefers to be heard, not seen. But when she's invited to testify at a Senate hearing on behalf of supernaturals, her face gets plastered on national television.

Kitty has been in hot water before, but jumping into the D.C. underworld brings a new set of problems---and a new set of friends and enemies, including the vampire mistress of the city; a super-hot Brazilian were-jaguar; and a paranoid, Bible-thumping senator who wants to expose Kitty as a monster. Kitty quickly learns that in this city of dirty politicians and backstabbing pundits, everyone's itching for a fight.

Kitty took a vital step towards becoming the strong heroine that Urban Fantasy buffs crave by severing ties with her dysfunctional pack in KITTY AND THE MIDNIGHT HOUR. However, she still has a long way to go in that area, and her submissiveness remains one of the biggest turn offs of this series for me. This book addressed the supes now being “out” development in great detail while also succeeding in keeping me engaged with multiple plots and new characters.

In KITTY GOES TO WASHINGTON, Carrie Vaughn goes well beyond skimming the surface of the paranormal revelation that rocked the human world in the previous novel. A Senate committee is formed, expert witnesses are called, and the topic is explored from a variety of standpoints including its political and religious implications. I really enjoyed the author’s approach, and the fact that the discussion is most likely far from over.

Cormac & Ben are quickly becoming indispensable secondaries, and I loved the surprising direction that Vaughn took with regards to the latter. Lawyer by day, and ___ by night! I also liked Alette, the vampire mistress of Washington, more than expected as well given how the story started out. The cast has gotten a smidgen out of control though for a second installment, and I was disappointed by the prompt resolution of Elijah Smith’s thread.

Marguerite Gavin began to demonstrate her versatility as a narrator in this title by tackling German and British accents which added an extra layer of authenticity to the author’s writing, and made it easier to identify the various characters. Her voice is perfect for the radio segments, and I think that she did an equally awesome job of Kitty’s off air personality. My only criticism would have to be Gavin’s male vocals; there’s definitely room for improvement in that area.

KITTY GOES TO WASHINGTON helped to steer this series back onto the straight and narrow.