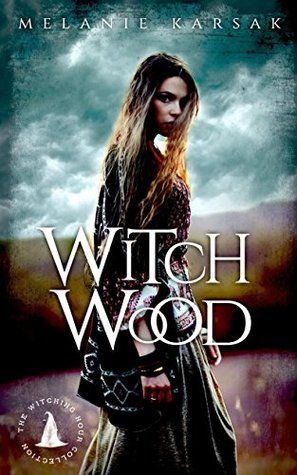 Harm none, and be ready for zombies.

In the little town of Brighton, Amelia’s practice of Wicca marks her as a curiosity both at home and at school. But Amelia can’t change what she is. Knowing how to see auras, heal, and cast spells comes naturally to her. Only Madame Knightly, the ancient matriarch and owner of Witch Wood Estate, to whom Amelia plays caretaker, doesn’t seem to mind. In fact, the crumbling old mansion is full of oddities.

However, when modern treatments fail to make a dent in the flu outbreak sweeping the globe, those who once ridiculed her white witchcraft turn to Amelia for help. While her eucalyptus tinctures prove no more effective than western medicine, her spell-casting is another matter. The residents of Brighton soon depend on the very magic they once ridiculed to save their lives.

**Witch Wood is a tie-in novella that compliments The Harvesting Series. It can be read alone or as part of the Harvesting series**


In the small town of Brighton, the flu is just beginning to take hold. School hasn’t been closed yet, but it’s the last hold out in the county. Teenager, Amelia, is a white witch, one that has been ridiculed as far back as she can remember. She doesn’t know it, but when she leaves school that day, nothing will ever be the same for her or anyone else in her town.

This is the second novella in the four stories that have been written so far, about this dystopian world, or the zombie apocalypse-if you want to call it that. The author has taken that premise and added all sorts of supernatural phenomenon and beings, even some that before I read these books, I had never heard of-despite all the paranormal books I read. When the humans start dying off, the supernatural beings that have been there all along, become much more present and visible to the surviving humans. Of course, humans don’t always know what they are seeing.

Amelia works part time as a caretaker of an old lady that lives alone in a six story mansion called, Witch Wood, just outside of town. The house has a rock wall surrounding the land it sits on, with a locking gate. So when she gets there after school, she should be safe, at least for the weekend. But when her mother calls her the next day and is deathly ill, Amelia chooses to leave the safety of the mist shrouded home to check on her mom. The old lady, Madame Knightly, doesn’t want Amelia to leave, but knows she can’t stop her. The town Amelia left the night before is no longer peaceful, instead it’s full of angry people, burning buildings, and strange cannibalistic beings that are no longer really alive.

What follows is an exciting thriller of a story, and ends up being quite the wild ride, albeit a short one. As in the previous installments,the author’s main characters are fully realized and the fact that it’s a novella doesn’t change that. It is a fairly short read, but one that was well worth the time(and purchase price)for me. These were new characters to the story, ones that hopefully will be more fully explored in the next book, so it’s not just a filler story, but one that is important to the whole.

I highly recommend this, and the whole series to older young adults and adults. It’s billed as a standalone, but it really would make much more sense in the context of the whole series.