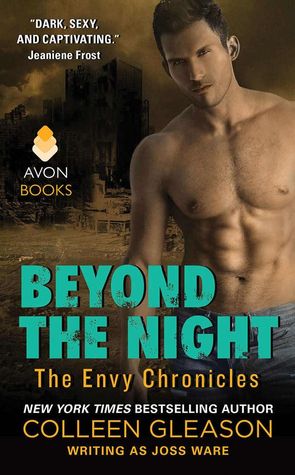 When doctor Elliott Drake emerges from a cave after a time travel of fifty years into the future, the world as he knew it is gone. Post-apocalyptic cities are now overgrown jungles, and what's left of civilization has been repressed by crystal-wearing immortal beings. But even more unsettling: sexy, strong Elliott has acquired an extraordinary ability--the paranormal, superhuman power to heal.

But even that psychic gift, in a world that lacks the technology and infrastructure of his past, is a two-edged sword for Elliott.

Strong-willed Jade Kapiza, who'd been imprisoned by the immortal beings, has been in hiding for years. But now she's determined to help the human race fight back against the control of her captors. She can trust no one...but when sexy, kind Elliott comes into her life, he pushes at her defenses and begins to tear down the walls she's built so carefully.

Yet the mysterious doctor seems to have secrets of his own. Can Jade
trust Elliott with her heart, even as they risk their lives to save a
band of innocents?

And can Elliott find a new place for himself--a home, a love--in this new, ravaged world?


I had never been into dystopian books much until I had some good luck with a couple of different series. Recently I found another series thanks to Melliane at Between Dreams and Reality blog, and the author is Colleen Gleason, although she is writing as Joss Ware. Since I really enjoy this author’s work, it was easy to slip right into a different genre by her.

Most of the world died in 2010 and nobody is really sure why-extreme weather events, earthquakes, and people simply dropping dead for no reason. Since then, a group of people known as Strangers have now inhabited the earth in small numbers. They have a crystal embedded near their clavicle and are immortal. Also new to the earth are a huge zombie type creature that are called gangas, that only come out at night.

When Elliott Drake and some friends wake up in a cave fifty years later, looking just as they did in 2010, it’s a shock to them all. They’ve lost everything and everyone they knew and a couple of them have new found abilities-Elliott in particular. He’s a doctor and now he is able to heal. Healing is not without a price however, and Elliott pays the biggest amount. He and his friends have been trying to get to the town of Envy for six months, since they have been told by other survivors about the large group of people that live there. When they come across a group of teenagers that have been attacked by gangas, they fight to save the group. Jade, a beauty riding a wild mustang, enters the fray as well and Elliott is smitten.

This series is billed as dystopian romance and that’s pretty much exactly what you get. However, I was pleasantly(?) surprised at the amount of intrigue, mystery, action, and violence that is involved as well. The book also introduces us to other females that you pretty much know are going to have their own books, with none other than Elliott’s other friends from 2010-of course I could be wrong, but there’s a pretty perfect set up here for that to happen.

My only problem with this book concerns Jade. She is in hiding due to being sought after by one of the villains. However, she sings in one of the few bars in Envy. I still can’t understand how she is in hiding and does that. It bothered me so I felt I needed to mention it. However, it wasn’t that big of a thing when taking the book as a whole.

I thought the pacing was excellent and as usual with this author’s work, the writing was well done. I really liked the characters that are introduced, and even the villains are well done-and particularly evil. To be honest, I am busy reading other books that I have to read, when all I want to do is dive back into this world and read the next one in this series, because I have had a bit of a book hangover since finishing this one. Recommended to any adult paranormal romance fans, or even urban fantasy readers that enjoy an exciting ride of a story.

22 responses to “Review: Beyond the Night by Joss Ware (@Mollykatie112, @colleengleason)”