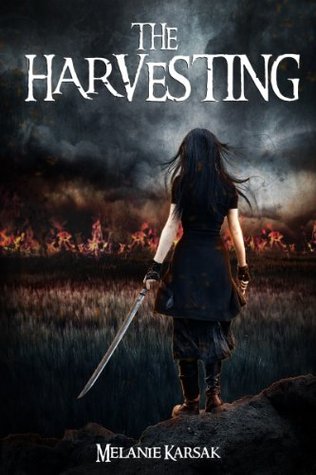 "The world, it seemed, had gone silent. It was something we knew but did not talk about. We were alone."

While Layla Petrovich returns home to rural Hamletville after a desperate call from her psychic grandmother, she never could have anticipated the horror of what Grandma Petrovich has foreseen. The residents of Hamletville will need Layla's cool head, fast blade and itchy trigger finger to survive the undead apocalypse that's upon them. But even that may not be enough. With mankind silenced, it soon becomes apparent that we were never alone. As the beings living on the fringe seek power, Layla must find a way to protect the ones she loves or all humanity may be lost.

Join Layla as she fights for survival in the first book of this unique zombie apocalypse tale. It's all fun and games until someone ends up undead!

Zombie dystopian? Sign me up! I admit that I am a huge Walking Dead Fan, although I fought against watching it. I ended up binge watching three seasons in about 5 days. So this book appealed to me as soon as I read a review by Kimberly from Caffeinated Book Reviews of a later book in the series.

Layla is an expert in ancient weapons and works in Washington D.C. She is called home to her grandmother’s house. Her grandmother has a lot of magic inside her and “sees” things that are going to happen. Layla ends up in a boarded up home, full of supplies, and it’s not long before a flu of some sort takes out most of the small town. Only the dead are still walking, and they are hungry for human flesh.

Layla ends up being pretty kick ass, especially since she brought some of her ancient weapons with her. Her grandmother had thought of everything, so the house has grenades and automatic weapons. It’s not long before Layla is running things amidst the forty something people that are left. Two of the survivors are her ex-boyfriend, Ian, and his brother, Jamie. Jamie never really registered on her radar before because of Ian, but he does now, and in a big way. He ended up being a really take charge kind of guy, way more so than Ian.

This book takes place over a several month period. The reader goes along for the ride, while Layla and the rest ride out a winter without electricity, or any outside help. And what a ride this was. There’s lots of supernatural things happening with Layla, and she now can see that humans are not alone, and I am not talking about just the zombies. On top of this there is quite the twist to the premise later on in the story and it ended up being pretty scary, as well as taking the story into a completely different direction.

The author calls this book horror or dark fantasy. I just consider it dystopian, and that usually is dark fantasy. And yes, there are horror components of course. It was a partial day read for me as I could not put it down. I should have known better than to start reading it in the middle of the night!

Spunky heroine and caring hero, plenty of action, violence, and kick butt moments made this an exciting read. The premise of zombies, has of course been done many times before, but the twist added so much more to the story, and I ended up being glad for it-sort of, anyway. And that’s because the plot was a bit Walking Deadish, previous to that. Not that The Walking Dead is bad!

I ended up buying the next book as soon as I finished this one, because I can’t wait to see what happens next. I think it’s an adult read due to the very dark subject matter, violence, language, etc, however the author says it’s PG-13. No sexual scenes, but it’s assumed that it’s probably happening. I highly recommend this to adult, dark paranormal readers.

34 responses to “Review: The Harvesting by Melanie Karsak (@Mollykatie112, @MelanieKarsak)”