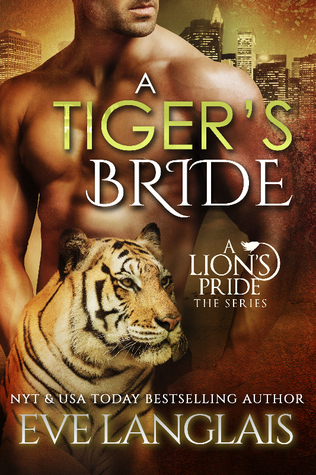 When at first you don’t succeed—turn to abduction.

It’s all in a day’s work when this Siberian tiger meets the woman he wants.

A virgin bride? Damn. There go his plans for seduction and here comes the pressure into making her first time perfect. Because everyone knows that's the one she'll remember, forever. Gulp.

Add in a plane crash as well as hunters out to capture them and the heat is truly on.

Can this Siberian tiger meet the challenge?

This was an interesting story, not something I was used to from Eve Langlais. For one, I’m not used to her heroes kidnapping the heroines, but that is what happens in this book. It isn’t quite as bad as it sounds. The story with this book actually starts off a little bit in the previous book.

Dmitri is a Russian mob leader tiger shifter who has been after Meena, the heroine of When an Omega Snaps. He had actually kidnapped her a few times only for her to escape. He wanted a large lioness to have his cubs so that the would be the largest cats around. Well, he gave up on Meena when she got married. Then he meets Teena, Meena’s twin sister; identical twin sister.

Teena and Meena might be identical twin genetically, but they are nothing alike outside of genes. Where Meena was very rockem sockem and a partier, Teena is more cultured and still a virgin. Both did inherit the clutz gene.

Dmitri decides at Meena’s wedding that he would do things right and woo Teena instead of the snatch and grab method that didn’t work Meena. However, his thugs didn’t get the call and drug and grab her anyway. Even then the escape back to Russia doesn’t go quite as planned.

For this being a story about a mafia kingpin kidnapping a woman and coercing her into marriage, this book is full of humor as you would expect from an Eve Langlais story. We don’t get to see as much of the lioness from the previous stories, but that is okay. I would like to see Luna get a story of her own one day.

So what if he doesn’t love me yet? We are married. He’s mine. She had the choice if she wanted to make this marriage real. To have him in her life, in her bed, and in her heart.
What about inside me?
Desire made her bold.
Tossing the phone to the side, she flung herself on the couch, spread her arms wide, and exclaimed, “Take me, I’m yours.”
It might have proven sexier if the French provincial sofa, with its carved spindle legs hadn’t collapsed on the floor.