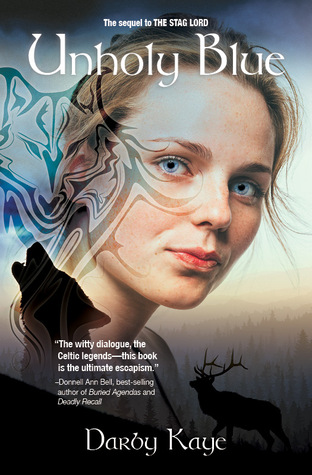 That’s how Shay Doyle likes her whiskey. And men. As Healer to a clan of immortal Celtic warriors living in modern-day Colorado, she has been gifted with such a man: Bannerman “Bann” Boru. The only problem is keeping the stubborn warrior alive. For Fate seems to have it in for Bann, and his son, Cor, descendants of the kings of Ireland, and recipient of an ancient grudge from the mad god, Cernunnos.

But, with a bit o’ luck, Shay, Bann, and the rest of the Doyle clan—along with the aid of a legendary huntsman known as the Black Hand—might just suss out how to kill a shapeshifter that refuses to stay dead, prevent clan warfare, and make a choice that could change their lives.

If they don’t lose them first.


UNHOLY BLUE was labelled Urban Fantasy by Darby Kaye herself, so unlike GoodReads’ shelves which tend to be wrong more often than not, I knew with utmost certainty what genre this title was classified as, and as a result approached it with a particular mindset. Sadly, other than the odd run-in with Fir Bolgs, over 50% of this novel read like a Contemporary Romance, so I had to rate it accordingly. Had it been tagged as PNR, my review would have been more forgiving.

Speculative fiction can’t be all paranormal all the time; characters still get married, have kids, go to work, etc. However, they do these things while killing beasties, staving off the zombie apocalypse, and honing their otherworldly abilities. Shay and Bann did all of the former, and practically none of the latter for the better part of this story, and their betrothal / parenting trials / house shopping weren’t even anything special which further added to the humdrum of it all.

I let Boru get away with murder in my review of THE STAG LORD because it was our first meeting, and I have a soft spot for tortured heroes. His chauvinistic attitude towards Doyle showed no signs of waning in this installment, and I found his lack of progression frustrating. Shay held her own just fine; she has a strong personality, and I was happy that she put her man in his place repeatedly, albeit after a while she started to sound like a broken record.

The plot didn’t really offer much in the way of curve balls. I was able to call every shot well before they happened which is a fun killer for me. I prefer there to be a certain degree of surprise to my books because otherwise I might as well skip straight to the ending. Cor was the only unknown in the whole equation, and unfortunately that thread wasn’t explored to its full potential. I enjoyed the traditional Celtic tidbits, but they could only do so much.

UNHOLY BLUE was a sheep in wolf’s clothing when it should have been the other way around.