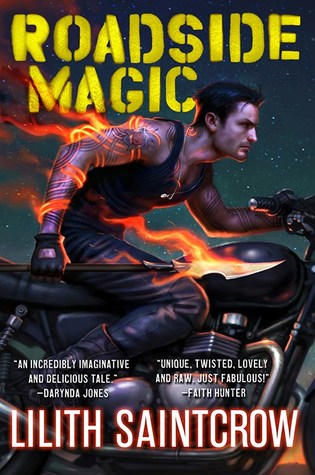 The Seelie and unSeelie Courts are both in plague-ravaged tatters. The Wild Hunt roams unchecked, taking who and what it will, and the walls between the human world and the world of the sidhe are thinning rapidly. Gallow is the only hope of human and sidhe both.

But all Jeremy wants to do is find Robin Ragged . . . and survive. Unfortunately, everyone who meets him has other plans. Including the Ragged, who is fleeing for her life—and the King of Unwinter, whose poisoned blade has cut deep into Jeremy's flesh...

I’m not one to swear off a series after a single book, so although I had some hang-ups about ROADSIDE MAGIC, I still requested a review copy. Having a more realistic outlook going into my second Lilith Saintcrow experience helped. I knew that there would be zero levity, and that her writing style was going to be my biggest speed bump. Both proved true, but the story also took a bit of a detour, and there was no improvement in the pacing.

The marketing of GALLOW AND RAGGED continues to mislead readers. The covers suggest action, and the blurbs promote humour; however both titles have contained neither. TRAILER PARK FAE was all about the sidhe plague, and yet that plot thread was kicked to the curb in this follow-up. Instead, the theme of this novel was capture the flag with Summer & Unwinter as the teams, and Robin as the prize. Sadly, the chase wasn’t that exciting.

I enjoyed the mortal snippets that were scattered throughout this installment which arose every time a mortal crossed paths with one of the fae. They were either gifted with incredible luck or horrible misfortune, and I welcomed that additional angle. Once again, the author snared me with her ending, and the promise of more thrilling things to come, although I already fell into that trap once, and I’m not sure that it bears repeating.

A couple of new characters were brought in with Pepperbuckle and Crenn being the most notable. The latter has a long history with Jeremy, and the former is tied to Ragged, so they did shake things up marginally. There wasn’t much in the way of romance which was good because quite frankly all of the candidates are yucky in their own disturbing way. I think that Saintcrow is going for shock value here, but father, brother-in-law or freak? Umm…

ROADSIDE MAGIC will be it for me I think.