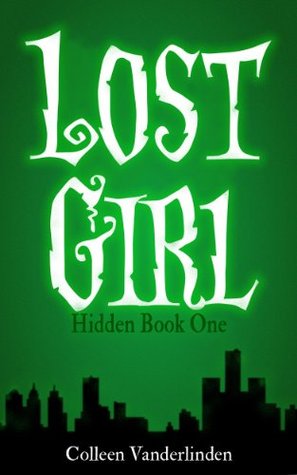 Molly Brooks is a telepathic vigilante with a few secrets and a mysterious past. Determined to make something of her bizarre powers, she devotes herself to saving those who need her most. One night, she's followed by a powerful being in a pickup truck, and her world will never be the same. Finding herself thrust into a world full of supernatural beings she could have only imagined, Molly learns how powerful she really is, and how much she stands to lose.

Combining elements of urban fantasy and paranormal romance, Lost Girl is the first book in the Hidden series by author Colleen Vanderlinden.

You know how some MCs are seriously badass, but others are trying so hard to be badass that they come across like one of those girls from high school who smoked in the bathroom?

Our story opens with Molly stomping across a college campus to check for reports of missing girls while looking down her nose at the people surrounding her and their fake problems.

Molly can hear their thoughts, you see, and apparently all the standard co-ed has on her mind is what color to paint her toenails.

Not like Molly. Molly knows about REAL problems. She’s a vigilante dubbed “the Angel” by the media, who uses her powers (telepathy, mind control, monochromatic wardrobe . . . ) to rescue lost girls—girls kidnapped on their way home from softball practice and destined for prostitution, women abducted by jealous ex-lovers, etc.

Molly does this to atone for some unnamed sin, and she does it in her uniform of black pants, black tee, and black chucks that match her long black hair, while driving around in her 1970 Barracuda:

Molly doesn’t need to be circumspect, b/c mind control.

It’s on her way to drop off the rescued softball-playing girls that she notices she’s picked up a tail, and after the girls are all safely home, she pulls over on the side of the road to see what the jackhole wants.

Imagine my surprise when Jackhole turns out to be a “mountain” of a man—6’6” at least, with piercing blue eyes . . . blah, friggin’, blah.

And Jackhole has a proposition. He can feel the power rolling off Molly, but she needs to be trained, and he’s just the demon to do it. Oh, and he’d like her to join his merry band of misfits.

So Jackhole messes around in her head a bit, b/c he can read minds too.


And who is Jackhole that he could train her, anyway?

Well, Jackhole is a demon who calls himself Nain after the French mythical Nain Rouge, which also happens to be a Detroit urban legend. Given that the book takes place in Detroit, that’s actually pretty cool.

Anyway, demons are BAD news, and Nain was no exception. He spent the first half of his life murdering, raping (YES, raping), and torturing, but while listening to a mother plead for the life of the baby he was about to kill, he realized that what he was doing was wrong. <------NOT one of my sarcastic summaries. That's pretty much what he said. Verbatim. And ever since then, he's fed his demon the fear and chaos it craves by murdering and torturing lowlife scum instead of innocents. Awww shucks. BUT Molly's not interested, so they part ways. Later that night, Molly wakes when she hears a window break in her house. She creeps downstairs to confront the intruder, and who does she find sitting at her kitchen table? The Anti-Molly. Tall, Blonde, and Evil with the Sugary Sweet Smile and the foul aura. Anti-Molly calls herself the Puppeteer, and also has a proposition for Molly---join her and her evil band of misfits, and Molly will have lots and lots of POWER.

Molly declines (b/c not a team player), Puppeteer insists, but Molly gets the drop on her by punching her in the nose, and Puppeteer runs away to the tune of, “You’re gonna regret this.”

And believe it, or not, all of that happened in the first four chapters.

It did get better. I nearly DNF-ed half a dozen times, but I stuck with it, and once Vanderlinden hit her groove, the book flowed much more believably.

Overall, a seriously rocky start to a series that shows promise, and I did one-click book 2. I’d recommend this to fans of darker UF like Sabina Kane or Downside Ghosts.

That groove that Vanderlinden hit? She hasn’t lost it since, and this series has turned into one of my favorites for 2014, and as an indie that’s quite an accomplishment.

I seriously thought about rewriting the review to reflect this development, but felt it was more important to be honest. For me, Lost Girl had some serious flaws, and the fact that Vanderlinden’s growth as a writer was practically tangible (beginning in the latter part of this book, and continuing with each installment) doesn’t negate those flaws. BUT. I wholeheartedly recommend this series to Urban Fantasy fans, and I hope you don’t let a less than stellar first book keep you from the rest of them–good UF is hard to find.