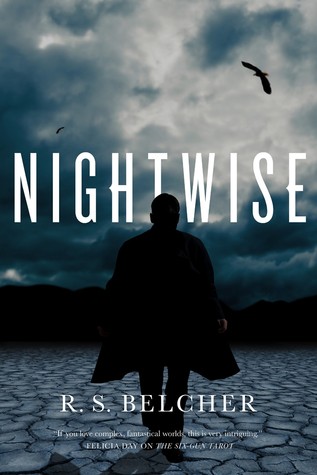 In the more shadowy corners of the world, frequented by angels and demons and everything in-between, Laytham Ballard is a legend. It’s said he raised the dead at the age of ten, stole the Philosopher’s Stone in Vegas back in 1999, and survived the bloodsucking kiss of the Mosquito Queen. Wise in the hidden ways of the night, he’s also a cynical bastard who stopped thinking of himself as the good guy a long time ago.

Now a promise to a dying friend has Ballard on the trail of an escaped Serbian war criminal with friends in both high and low places—and a sinister history of blood sacrifices. Ballard is hell-bent on making Dusan Slorzack pay for his numerous atrocities, but Slorzack seems to have literally dropped off the face of the Earth, beyond the reach of his enemies, the Illuminati, and maybe even the Devil himself. To find Slorzack, Ballard must follow a winding, treacherous path that stretches from Wall Street and Washington, D.C. to backwoods hollows and truckstops, while risking what’s left of his very soul . . .

I couldn’t even finish the preview of this book.

I’m not saying no one will like it. In fact, if you like the grittier urban fantasy à la Stacia Kane, Jaye Wells, or Chuck Wendig, there’s a significant chance it might go better for you.

But I’m not one of those.

I pulled out an American Spirit, only three left in the pack, second pack today.

I took a long draw on the cigarette, ran a hand over my shaggy hair. I had pulled it back, tight, into a ponytail to keep it out of my way.

This guy sounds like the adult version of one of my high school crushes, but after awhile having hair long enough to pull back in a ponytail and smoking cigarettes are no longer small, attractive signs of rebellion.

I can’t say that long hair on a guy is stupid the same way I think smoking is, I just no longer think it’s hot. Or professional. But a two pack a day smoking habit . . .?

1. Gross, man.
2. There is nothing ironic about calling cigarettes nails in your coffin even as you light up.

If you’re that hellbent on killing yourself, there are more efficient, less painful ways to do it. I’ll even help if you ask nicely. *mutters* Idiot.

And, yes, smoking and long hair are superficial things to get hung up on, but they’re more illustrations than they are minor details.

The tone of NIGHTWISE is that of a middle-aged man trying to relive his glory days, not realizing that the rest of us have outgrown those ideals.

Over the course of a mere handful of pages he:

1. Refers to Hitler as the guiding light to evil psychopaths everywhere. YES. Hitler is the “Henry Ford” of evil bastards.

2. Goes on a long tangent to convince you that EVIL IS REAL. It’s out there, man, maybe “watching your kids” even as we speak. He didn’t grow up in “Disneyland” like all of us “sane” people, a category he clearly excludes himself from.

Ever heard of CSI? How about Criminal Minds or one of the multitudes of similar TV shows/books/movies that our culture currently thrives on? We know evil is real. We’re damn near enthralled by it.

3. Informs us that more often than not, he himself is one of the monsters.

*eyes get stuck b/c rolled too many times*

Go away, dude. Nobody likes you.