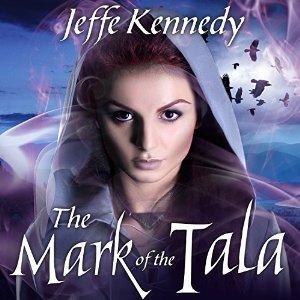 Queen Of The Unknown

The tales tell of three sisters, daughters of the high king. The eldest, a valiant warrior-woman, heir to the kingdom. The youngest, the sweet beauty with her Prince Charming. No one says much about the middle princess, Andromeda. Andi, the other one.

Andi doesn't mind being invisible. She enjoys the company of her horse more than court, and she has a way of blending into the shadows. Until the day she meets a strange man riding, who keeps company with wolves and ravens, who rules a land of shapeshifters and demons. A country she'd thought was no more than legend--until he claims her as its queen.

In a moment everything changes: Her father, the wise king, becomes a warlord, suspicious and strategic. Whispers call her dead mother a traitor and a witch. Andi doesn't know if her own instincts can be trusted, as visions appear to her and her body begins to rebel.

For Andi, the time to learn her true nature has come. . .

I know I don’t normally review audiobooks here, but since this was the only book in this series that is on audio. I’ll have to read the rest of the series, so I thought I would review them all in one place. The Mark of the Tala is the first book in the The Twelve Kingdoms series by Jeffe Kennedy. I met Ms. Kennedy at RT15 in Dallas and really wanted to read some of her books. I have read Petals and Thorns by her under a different pen name, and wanted to try this series next.

Andromeda is the middle sister. She never really stood out. Her older sister, Ursula, was quite the warrior and in training to run the kingdom when their father dies. Amelia is beautiful and has bards writing sonnets about her. Andi just wanted to ride her horses and fade to the background. They really don’t know their mother very well. She died giving birth to Amelia. Ursula is the only one who has any real memories and she was still young as a tween when her mother died.

Andi runs into a guy she has never met before while she is out riding. She is instantly drawn to him, but at the same time doesn’t trust him. She eventually learns that he is one of her mother’s people, the Tala. Andi and her sisters know almost nothing about their mother’s people. Their father forbade anyone to speak of them and any records of them destroyed. The Tala are known as “black witches”.

I loved Andi’s love for her horse, Fiona. I loved how she craved her horse and didn’t want to see her come to harm, but also knew that a horse is not as important as her people. It was a very difficult choice for her. It is something that would be very difficult for me as well. My animals are everything to me. I would have a hard time putting people in front of them as well.

I felt this was a very fun introduction fantasy romance series. I love the world that Ms. Kennedy has built. The characters are all very well developed. I want to learn more about all of them. I am a bit disappointed that this is the only book in the series that was put on audio. I would love to continue to series on audio, but I will continue to read the series, because I loved it so much.

Narration
Cris Dukehart does a great job with narration of this book. It is not the first book that I’ve listen to with her narration. She also does the Shifters Unbound series by Jennifer Ashley, which I started earlier this year. I think she does a great job. She handles both male and female characters with ease. I really enjoy her pace and tone. I do recommend her as a narrator.

16 responses to “Audiobook Review: The Mark of the Tala by Jeffe Kennedy (@mlsimmons, @jeffekennedy)”