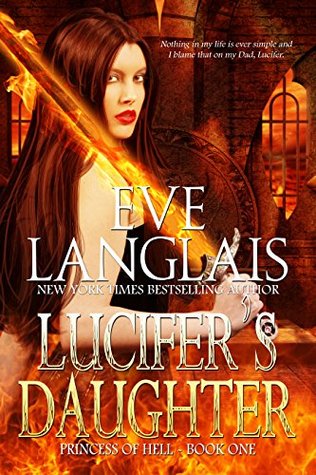 It drives my dad nuts I’m such a goody two shoes, but the fact that I’m a virgin makes smoke pour from his ears. See, I’m determined to save myself for love, but daddy dear, more commonly known as Lucifer, just wants me to stop being an embarrassment. Would it kill you to sin a little?

Maybe he’ll get his wish because I met an intriguing hunk last night in my bar. Could he be the one? He certainly melts my panties like marshmallows over the coals of Hell, but do I dare trust him? My last boyfriend thought he’d gain infamy by killing me. He’s infamous all right. Dad had him mounted on a wall, his version of modern art titled, ‘Touch my baby girl and die’. Cute in a twisted way.

My love life isn’t the only thing I've got to worry about. There’s someone threatening the denizens of Hell, and while my daddy says to not worry my pretty little head about it, I an involved because whoever is behind the attacks keeps coming after me.

Bring it. I’m not afraid. Being a princess of Hell means that sometimes I have to grab a demon by the horns and slap it around. It’s what keeps my ass looking great.

Nothing in my life is ever simple, and I blame that on my dad, Lucifer. Assassination attempts, hellhounds, and a rebellion in Hell? A piece of cake compared to the turmoil in my heart. No one ever told me love would be the toughest battle of all.

I read this book several years ago, 2011 to be exact. I can’t remember exactly how I found it. I just remember seeing a review or reading the blurb and thinking that this story looked hilarious. I had never heard of Eve Langlais at this time. I mean, how can you not love a story about a goodie two-shoes virgin who is disappointing her father, Lucifer. It just sounded too funny for me to pass up. I just loved this story and to this day, Eve’s version of Lucifer is one of my favorite characters. He is just so much fun.

Now that this story is being re-released with a new cover and more bulk, I jumped at the chance to revisit the story. After all, this is the story that brought Eve into my life. It has made it a very important series for me. This series, unlike most of Eve’s other series, this story is more urber sexy Urban Fantasy than Paranormal Romance. The story follows Muriel throughout at least the first three books (I haven’t read book four, but I will be after this re-read).

Muriel is a bar owner for all the magical type beings in the area. She is also a magical null. Magic tends to not work around her for the most part, which is why her bar does so well, both sides are more likely to get along. That is until someone starts to come after Muriel. There is a faction trying to overthrow her father, Lucifer. This is nothing new, but this faction is doing better than most and they want Muriel for leverage.

Auric makes an appearance at the bar. Muriel is instantly drawn to him, but she can’t tell what he is. Oh, and he passes the sister test. This is not what you think it might be. Bambi is Muriel’s half sister and a succubus. She draws men like flies to honey. Auric doesn’t seem to notice her because all of his attention is on Muriel. This has never happened to Muriel before.

“I don’t know why, but I’m attached to you, too,” Satan said grumpily, hugging me back. I cherished moments like that; they tended to be few and far between. “Try to be bad,” he said, before popping out of sight.”

“It wasn’t bad enough you got straight As in school. Oh, no.” He paced faster as he warmed up for his rant. “You just have to be a virgin, too. You’re twenty-three years old. It’s just wrong,” he shouted. “I raised you to be more evil than this.”

“Muriel, if this relationship is going to work, then I’m going to expect you to listen to me.”
I snorted. “Good luck with that.” If my dad never succeeded, what made him think he could? Wait a second. Had he said the word relationship?

This story was everything I had remembered it to be. It was a quick read that was very funny and extremely sexy. There are a ton of sexual innuendos throughout the book that made laugh several times. Let’s just say that Auric has a sword and knows how to use it. LOL. Now, I’m even more excited to revisit books two and three, not to mention start book four.