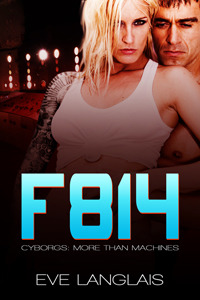 She thought herself a robot, defective and unique among her kind, until he taught her how to live again.

F814 exists to serve the humans until they decide to terminate her. An instinct for survival makes her fight, but when she achieves freedom, she discovers she cannot throw off the chains of habit. Everything changes when another flesh covered droid arrives, a cyborg he calls himself, who teaches her she is more than a machine.

Solus hates humanity, and even though he was born as a flawed human, he strives to eradicate all traces of it from his persona—until he meets F814. Meeting and touching her releases something in him. Has him yearning for things he doesn’t understand. Makes him long for…affection.

Before he can learn to love though, he must first tackle the task of reminding F814 that she is more than the sum of her mechanical parts. But of course, when dealing with an illogical thing like emotions, there is no sure plan for success.

In this sequel to the cyborg series, it starts off with F814. She is a droid working in a mining camp. She is different from all the other droids in that she has this humanoid type body that can’t take all of the abuse that the other droids can. She works hard to hide that she has any feelings, that is until she hears that she is set for termination. That doesn’t go over very well and let’s just say that the humans are the ones that are terminated. She lives alone for several months, while humans keep coming to try to take the mining asteroid back, to no avail.

Solus, Seth, Aramus, and Einstein are sent on a mission to get much needed supplies for the cyborg home base by Joe (from C791), the cyborg leader. They stop on what they think is an abandoned mining asteroid only to find a female cyborg mining the ore. She doesn’t take lightly having these guys show up. She also doesn’t believe that she is the same thing as they are. She also doesn’t believe that she has sister cyborgs.

Solus is a cyborg who despises humans way more that the majority of the cyborgs. He prides himself on his logic and lack of feelings. He was also the one who gave Joe the most grief in book one when Joe fell in love. So you can imagine how it goes over when he starts to have feelings for this new female. He got very possessive over F814 for the longest time. It is quite the struggle for him, both to internally come to terms with these feelings. Then he had to figure out how to share those feelings with this woman who is just as confused as he is.

F814 has no memory of her life before the mining camp. She doesn’t ever remember being human. She doesn’t remember ever being any kind of cyborg before the camp. All she has ever known is the abuse given to her by the humans that ran the camp. They treated her like a sexbot and a robot slave. She didn’t have adequate food, water or warmth, just enough to get by. It takes a while before they even figure out that her name is Fiona.

Like the previous book in the series. This book was a lot of fun and quick read. I have to say it again. Who knew that cyborgs could be so much fun and so sexy?? I should’ve read this series so long ago. Well, I’m getting caught up now and I’m loving it. I highly recommend this series if you are looking for something fun to read. I do recommend starting at the series, because the world-building is really set in that book and continues to build in this book.