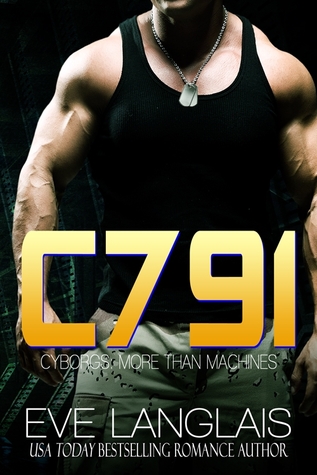 Machines aren’t supposed to feel, but this cyborg can’t help falling in love.

Assigned as a specimen collector for a captured cyborg, Chloe is intrigued by the machine disguised as a man. Kidnapped during his daring escape, he shows her that despite the chip in his brain, his humanity is not completely lost.

Formerly known as unit X109GI, Joe is on a quest to discover his origin. While he doesn’t find the answers he’s looking for, he does discover that affection isn't just for humans. But when it comes to a battle between logic and love, which side will the cybernetic organism—once a man—choose?

Evaluating his feelings will have to wait though because the military isn’t done with Joe. But their threats against him pale in comparison before the shocking discovery of project C791, the revelation of which stuns the rebel cyborgs—and ignites a fury for vengeance.

I’ve been a big fan of Eve Langlais for a long time. I’ve read most of shifter and demon books. I keep hearing great things about her cyborgs. My first thought, was “Really, cyborgs??”, but I too many people I trust have tried them and enjoyed them. So I decided to dive in. I already had this on my kindle. I had picked it up when it was free for a limited time, so I had nothing to lose, right? I’m really glad that I picked it up and decided to finally read it.

The book opens with humans calling for the destruction of all cyborgs. They are supposed to be told to walk out into open space where they will sucked into the vacuum and cease to exist. One cyborg who has started to feel things, but has been hiding this from the humans, decides to take a stand. X109GI doesn’t want to see all those just like him and himself killed. So, he hacks the systems and revolts.

Jump forward several years and now there is a war between the humans and cyborgs. X109GI, who now goes by Joe, gets captured by the humans. They are trying to find out where the cyborg base is at. They want tissue and fluid samples from him, but he kills everyone who goes into his cell. That is until Chloe appears. She intrigues him. She starts off terrified of the cyborg, but is using it as a way to move up at the lab. She has been treated so badly for as long as she could remember.

This book is a quick read and is a ton of fun, which you would expect from an Eve Langlais book. It was very funny with a story that keep me interested. I will admit that the twist at the end, I could see coming, but that is okay. This book did what I wanted, it made me laugh and was very sexy. I’m excited to get into more of these books. I want to learn more about the cyborgs that we meet in the later part of this story.