I’m thrilled to show off the cover of OWL AND THE CITY OF ANGELS, the followup to one of my favorite reads from last year, Owl and the Japanese Circus!

With a sword in one hand and a flashlight in the other, I can’t wait to see what Owl gets up to next! 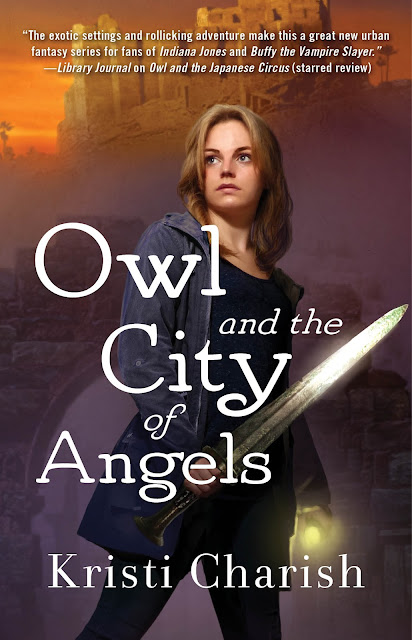 
Kristi is also a scientist with a BSc and MSc from Simon Fraser University in Molecular Biology and Biochemistry and a PhD in Zoology from the University of British Columbia. Her specialties are genetics, cell biology, and molecular biology, all of which she draws upon in her writing. She is represented by Carolyn Forde at Westwood Creative Artists.

I have not one, but TWO books up for grabs: a physical ARC of OWL AND THE CITY OF ANGELS (of which there are only three currently in existence) and signed copy of OWL AND THE JAPANESE CIRCUS. Once again, I’m a lazy bum and rafflecopter is not in the cards. BUT. Random.org is! Yaaaaaay! US and Canada only. You have one week to leave a comment and be eligible for both giveaways. May the odds be ever in your favor.

21 responses to “Cover Reveal, Exclusive Excerpt, and Giveaway: Owl and the City of Angels by Kristi Charish”