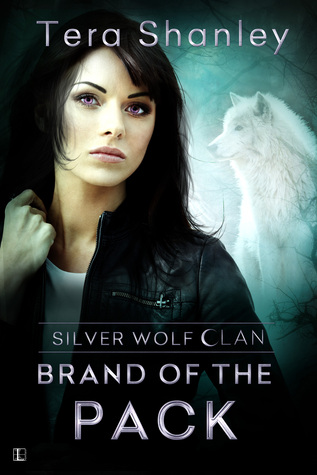 The last of her kind
As the last of the Silver Wolves, and the only female with the ability to produce werewolf offspring, Morgan Carter is a wanted woman. Male suitors from all packs vie for her, and threaten the safety of her young niece, Lana. But there is only one man Morgan wants . . .

The last of his control

Greyson Crawford has been through hell and back for Morgan. And he’d do it again. But until she learns to trust him, and lets him claim her as his own, he can’t fully protect her. When a force more powerful than either have known threatens to tear them apart, can Greyson convince Morgan to accept him as her mate once and for all, before it’s too late?

Brand of the Pack is the third installment of this novella series by Tara Shanley. I say novella, but the author is adept in writing a full story with well realized characters in a short read. Do I wish each one was a bit longer, of course, because I have enjoyed all of them up until now.If you plan on reading this series, there are some spoilers in this review.

A little background is in order three novellas in, I think. Morgan was in the woods camping with her sister and niece when they were attacked by what can only be called a beast. Greyson was camping a bit away from them and upon hearing the attack goes in and saves Morgan and the child. Her sister was killed, and Greyson was bitten and ran away. Months later they meet again. Greyson is now a werewolf-but not your run of the mill one-he is stronger, larger, and way more scarier, with a wolf that is barely contained by his human side.The two fall in love, but so much has happened along the way to both themselves and to their love story.

Morgan is now a rare silver wolf-the only wolf capable of having babies. Because of this, all of the werewolves from around the area and far away are wanting her. She just wants Greyson, although she did have to go through being kidnapped in a previous book. Now she is back and almost ready to become Greyson’s mate.

I found this one to be not as scary as the previous one, but just as entertaining. The author continues her world building, specifically about the brand of the pack. I always enjoy when an author adds something that I have not read in a shifter book before-as long as it makes sense. And this, of course, made sense. There’s also plenty of action, as Greyson is challenged for Morgan, over and over again. But the crux of this novella is centered on Morgan and Greyson finding their way back to each other after her kidnapping.

I enjoy all the characters in these stories, of course Morgan and Greyson, but also Marissa, the young wolf with a past full of horrible abuse, and who is now part of Greyson’s pack. The neighboring pack is full of good characters as well, and have been part of each installment. Besides the wolves that come to challenge, this time a foe from the first book has a part in this book-not a big part-but you know she will be wreaking havoc in the next one.

Novella #4, Summit of the Wolf releases September 1st, and I will be reading it as soon as possible. These stories always entertain and I plan on reading them until the series is finished. Someday, I would love to see Marissa get her happily ever after, and as she is only fourteen, I am sure that will be awhile. Recommended for adult romance readers, not so much for sexual situations, but for violence as well.

22 responses to “Review: Brand of the Pack by Tera Shanley”