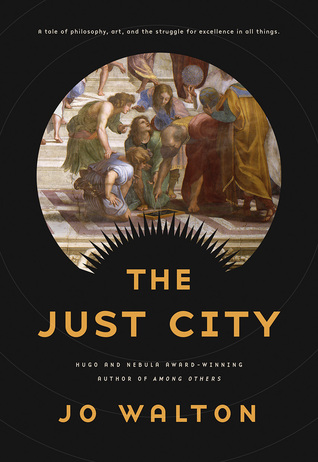 “Here in the Just City you will become your best selves. You will learn and grow and strive to be excellent.”

Created as an experiment by the time-traveling goddess Pallas Athene, the Just City is a planned community, populated by over ten thousand children and a few hundred adult teachers from all eras of history, along with some handy robots from the far human future—all set down together on a Mediterranean island in the distant past.

The student Simmea, born an Egyptian farmer’s daughter sometime between 500 and 1000 A.D, is a brilliant child, eager for knowledge, ready to strive to be her best self. The teacher Maia was once Ethel, a young Victorian lady of much learning and few prospects, who prayed to Pallas Athene in an ungaurded moment during a trip to Rome—and, in an instant, found herself in the Just City with grey-eyed Athene standing unmistakably before her.

Meanwhile, Apollo—stunned by the realization that there are things mortals understand better than he does—has arranged to live a human life, and has come to the City as one of the children. He knows his true identity, and conceals it from his peers. For this lifetime, he is prone to all the troubles of being human.

Then, a few years in, Sokrates arrives—the same Sokrates recorded by Plato himself—to ask all the troublesome questions you would expect. What happens next is a tale only the brilliant Jo Walton could tell.

THE JUST CITY by Jo Walton . . . is one of the strangest books I’ve read in long time.

The premise is fascinating: the Greek pantheon exists outside of time, meaning the gods can move through it fluidly. They can also snatch humans out of their various centuries and dump them in a time and place of their choosing.

Pallas Athene does exactly this, answering the prayers of intellectuals from as far in the future as the twentieth century and as far in the past as to be contemporaries of the Greek philosophers, and gathered together on the island destined to become known as Atlantis, they begin their experiment: to create Plato’s REPUBLIC.

It’s told from three alternating perspectives: Maia, a Victorian woman who chaffed under the restrictions of her society, Simmea, an uncommonly bright, but plain in appearance female student, and Pytheas, also know as Apollo, who gave up his godhood to experience humanity . . . born as a human, growing as a human, learning as a human, with only his (intact) memories to separate him from actually being human . . . As obvious a ploy as that was, Apollo-as-human was my favorite part of the story.

But unlike Christ, Apollo didn’t become human to save humanity, he became human out of curiosity. He couldn’t understand why Daphne would rather become a tree than mate with him, didn’t understand why she wouldn’t play the “game.”

Still unable to comprehend after asking both Artemis and Athene, he decides to become human “to learn about volition and equal significance.” His journey is . . . compelling.

In addition to Cicero, Boethius, and the like who have been on hand, debating laboring to create the perfect environment in which to educate future Philosopher Kings, Sokrates himself is brought to the city to educate the students in Rhetoric. Apollo openly acknowledges that he doesn’t know everything, and quite enjoys observing Sokrates as he encounters ideas and technologies (the Just City is powered by electricity and has worker robots that function as “the help”):

It was adorable to see [Sokrates] introduced to the concept of zero. But watching him go after potential artificial intelligence was priceless. That alone would have been worth all the time I spent in the city.

But Apollo’s own experience was just as adorable, just as priceless. He’s like a poorly socialized home-schooled kid, but he’s aware of his deficiencies and has a genuine desire to learn and grow. Watching him make his numerous mistakes only endears him to you.

In contrast, after seeing to the completion of her project’s development, Athene poses as a student, retaining her god status, and, likewise, her detachment.

And that is the root of my main issue with book, b/c as unique a spin as this is on those two subjects, they are subjects that have been addressed more than frequently. Like Apollo says about the experiment itself:

Athene and I certainly didn’t imagine it would really work the way Plato described it. We knew too much about the soul to hope for that. What was interesting was seeing how much of it could work, how much it really would maximize justice, and how it was going to fail. We could learn a lot from that.

And that’s certainly true. BUT. A book that is ultimately a fictional experiment—doomed to fail—can teach us, the reader, nothing new. The whole thing is almost Post Modern in its complacent acceptance of horrible things. Like a woman being date-raped, but she says nothing, b/c it could destroy her already tenuous status in male-dominant society. Male-dominant despite the very tenants of Plato’s “just city,” and despite the equal numbers.

Yes, I get it. No amount of equal opportunity employment propaganda is going to force attitudes to change. Again . . . I already knew that. EVERYONE knows that. SO as much as I enjoyed watching half a dozen characters grow and change in truly profound ways, the “experiment” itself and its inevitable conclusion keep it from being a perfect read.

However, Walton’s writing is clever and insightful and dynamic, and it really made me think. This is not fluff. This is a book to read when you want to scratch deeper than the surface.

Part science fiction with time travel and robots who may or may not be developing cognizance, part fantasy with meddlesome Greek gods and their machinations on Atlantis, but both parts an examination of humanity and classical philosophy, THE JUST CITY is the first book by Jo Walton that I’ve read, but it definitely won’t be the last. Recommended with qualifications.

4 responses to “Review: The Just City by Jo Walton”